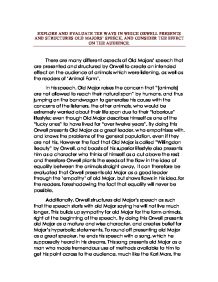 EXPLORE AND EVALUATE THE WAYS IN WHICH ORWELL PRESENTS AND STRUCTURES OLD MAJORS' SPEECH, AND CONSIDER THE EFFECT ON THE AUDIENCE. There are many different aspects of Old Majors' speech that are presented and structured by Orwell to create an intended effect on the audience of animals which were listening, as well as the readers of 'Animal Farm'. In his speech, Old Major raises the concern that "[animals] are not allowed to reach their natural span" by humans, and thus jumping on the bandwagon to generalise his cause with the concerns of the listeners, the other animals, who would be extremely worried about their life span due to their "laborious" lifestyle; even though Old Major describes himself as one of the "lucky ones" to have lived for "over twelve years". ...read more.

Additionally, Orwell structures old Major's speech as such that the speech starts with old Major saying he will not live much longer. This builds up sympathy for old Major for the farm animals, right at the beginning of the speech. By doing this Orwell presents old Major as a mature and wise character, and creates belief for Major's hyperbolic statements. To round off presenting old Major as a great speaker, he ends his speech with a song, which he supposedly heard in his dreams. This song presents old Major as a man who made tremendous use of methods available to him to get his point across to the audience, much like the Karl Marx, the thinker behind the principles of Marxism. ...read more.

This idea is threatening towards the animals which gives them one more reason to agree to the revolution as they would feel threatened an un easy if they did nothing to prevent their fate that the Old Major described. This use of emotive language used by Orwell in the speech makes the reader sympathise with animalism/ Marxism, however presents the current democratic system as the way the farm is being currently run, which is totally unfair for the animals/ploratariat in the democratic system. I believe that it can be evaluated that Orwell is very succesful in adjoining old Major's views with the concerns of the animals, and through the emotive language is able to put across old Major as a wise, well natured but not perfect; just as Orwell would have seen Karl Marx as a socialist in the 1940's. ...read more.

The candidate here retains an excellent focus on the question. Everything they say in directly in line with what the question asks, and their is no ineffectual digression from the topic of Old Major's speech. It is a joy to ...

The candidate here retains an excellent focus on the question. Everything they say in directly in line with what the question asks, and their is no ineffectual digression from the topic of Old Major's speech. It is a joy to see such a focused analysis on such a relatively small topic given the contents of the book, but where lesser ability candidates might stray far from the given extract to try and analyse some vague area of the book that is not required, this candidate realises that their is plenty of analytical merit available, implicitly hidden within Old Major's speech because, as the candidate rightly points out, Orwell mimics a lot of what is to come in Old Major's speech.

The Level of Analysis is very good, and the structure of this essay helps. It is not overly systematic, though clearly has a structure that it follows and allows the reader to follow also, with optimum ease. All points made are clear and relevant, though some lack the depth required to achieve much higher than a strong B grade for GCSE. For example, the candidate makes two analytical points that boil down to "creating sympathy [paraphrased]". Whilst these points are valid, the second one about emotive language does not simply "make the reader sympathise", but empathise and draws them in through the use of powerful, hard-hitting language. It shows Old Major is passionate about what he is saying and this passion rubs off on the animals. Other than that, the analysis is sound.

The Quality of Written Communication (QWC) is fine. There are a few mishaps and spelling errors which could easily be rectified had the candidate spell-checked and proof-read their answer before closing the exam booklet/submitting their final coursework draft. I would argue that the name of Old Major must not be written as "old Major" because capitals letters are always used for names and titles so again, small things that area easily sorted, but can lower the QWC marks if left alone.