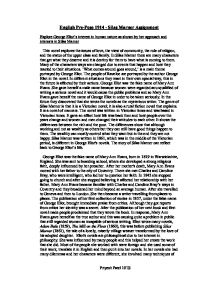 English Pre-Pose 1914 - Silas Marner Assignment Explore George Eliot's interest in human nature as shown by her approach and interests in Silas Marner This novel explores the issues of love, the view of community, the role of religion, and the status of the upper class and family. In Silas Marner there are many characters that get what they deserve and it is destiny for them to have what is coming to them. Many of the characters ways are changed due to events that happen and how they reacted to their situations. 'What comes around goes around,' is a main theme portrayed by George Eliot. The people of Raveloe are portrayed by the author George Eliot in the novel. In different situations they react in their own special way, this in the future is affected by their actions. George Eliot was the fake name of Mary Ann Evans. She gave herself a male name because women were regarded as unqualified of writing a serious novel and it would cause the public problems and so Mary Ann Evans gave herself the name of George Eliot in order to be taken seriously. In the future they discovered that she wrote the novels as the mysterious writer. The genre of Silas Marner is that it is a Victorian novel; it is also a rural fiction novel that explains. It is a novel of manners. The novel was written in Victorian times and was based in Victorian times. It gave an effect how life was back then and how people over the years change and women and men changed their attitudes to each other. ...read more.

Silas's has accepted what has come at him and has lived on. He has faced some terrible ordeals but he is rewarded with a child. He has been through a lot and when things started looking bad they started to lighten up him. He gets his stolen money back, he has got a wonderful child, he is happy and faith is restored into him, in the end everything is going right for him. He is not a selfish man and he has not committed a terrible crime so destiny has played its part in his life. He has reacted to the situations that he has to face quite calmly. Eliot takes care to give each character his or her just deserts. Dunsey dies, the Squire's lands are divided Godfrey wins Nancy but ends up childless, and Silas lives happily ever after with Eppie as the most admired man in Raveloe. The tidiness of the novel's resolution may or may not be entirely believable, but it is a central part of Eliot's goal to present the universe as morally ordered. Fate, in the sense of a higher power rewarding and punishing each character's actions, is a central theme of the novel. For Eliot, who we are determines not only what we do, but also what is done to us. Nearly any character in the novel could serve as an example of this moral order, but perhaps the best illustration is Godfrey. Godfrey usually means well, but is unwilling to make sacrifices for what he knows to be right. ...read more.

This theme shows throughout the novel. Though Silas finds some satisfaction in his tenacious weaving and hoarding of gold, he only discovers true happiness after he dedicates himself to inter-personal relationships. Though his exile from Lantern Yard proves devastating to his self confidence and trust in others and God, fifteen years later Silas makes a full recovery. Eliot portrays Godfrey and Dunstan as wealthy, selfish people who try to use one another and others to their personal advantage and that the upper class has damaged society. The Cass family, shown as the upper class, thinks that their wealth gives them special rights to anything. This shows that you can be happy but poor and sad but rich. My personal opinion is that any action you take will affect your life and by doing something bad will make situations in life bad. Silas Marner is an example how fate and destiny works if you do something bad. By being kind, humble is more likely that you will turn out happy and you will get lucky because of destiny. You should treat people equally and look after each other because the very thing you want might be what the other person has or is. George Eliot has written the novel in a psychological manner because if you really think about it the story has a moral and that destiny is determined on what you do. George Eliot implies that being good in life will make you have good outcomes. Overall fate and destiny decide the future of what you do, by the actions you are doing right now in the present. ?? ?? ?? ?? Priyesh Patel 10TS ...read more.