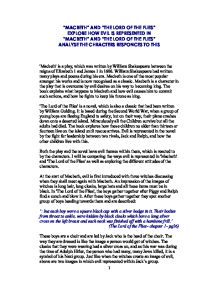 Explore How Evil Is Represented In Macbeth and Lord of the Flies.

"MACBETH" AND "THE LORD OF THE FLIES" EXPLORE HOW EVIL IS REPRESENTED IN "MACBETH" AND "THE LORD OF THE FLIES" ANALYSE THE CHRACTERS RESPONCES TO THIS 'Macbeth' is a play, which was written by William Shakespeare between the reigns of Elizabeth 1 and James 1 in 1606. William Shakespeare had written many plays and poems during his era. Macbeth is one of the most popular amongst his works and is now recognised as a classic. Macbeth is a character in the play that is overcome by evil desires on his way to becoming king. The book explains what happens to Macbeth and how evil causes him to commit such actions, and how he fights to keep his throne as king. 'The Lord of the Flies' is a novel, which is also a classic that had been written by William Golding. It is based during the Second World War, when a group of young boys are fleeing England to safety, but on their way, their plane crashes down onto a deserted island. Miraculously all the Children survive but all the adults had died. ...read more.

(Macbeth- Act 2 Scene 2- Lines 14-15) Even though the murder took place two scenes later, it was still late night. Macbeth and Lady Macbeth had planned to perform the wicked act at night. As murder is already evil, the atmosphere of it being late and gloomy had added to the atmosphere. This evil can be seen also in 'The Lord of the Flies' when Simon faces his death. Simon is returning after seeing The Lord of the Flies and is shouting to the boys that there is no beast. It is late and dark, the boys are dancing and feasting, they hear some noises, they think it is the beast and viciously attack it only to find out that it was Simon. 'Going to be a storm, said Ralph. The dark sky was shattered by a blue white scar.' (The Lord of the Flies- chapter 9- pg187-188) The similarities can be seen in how evil is represented in the novel and the play. William Shakespeare and William Golding both have used the same ways to represent the evil and similar ways to emphasise it through the atmosphere and nature. Another resemblance that is seen in both texts is the theme of peace. ...read more.

I feel as if the authors have done an excellent job in conveying the evil to the reader and representing how people are convinced to commit such acts. The similarities can be seen between Jack and Macbeth in the texts. They have much in common and that is in an evil concept. They both enjoy killing and have an obsession with it, causing them to lose control of what happens around them. The other characters like Piggy, Ralph, Malcolm, Macduff have realised what Macbeth and Jack had become. They realised that they would have to act if they wanted to change things around. They did this by speaking out aloud and through physical battle. The authors have used the characters to symbolise the current situations faced by people in the present world. The Lord of the Flies along with Macbeth informs us that the human nature cannot be seen with the naked eye. It only reveals itself when it comes across a situation in, which it cannot hold itself any further. I believe that these texts illustrate that if there is something that needs to be changed then people should strive out and try to make a change, just like Macduff and Ralph did. 1 ...read more.

Trying to cover these two texts in one essay has resulted in too superficial an analysis. There are some good points being made but the links between the two texts never really become developed. When carrying out any comparative analysis the linking through similarities and differences needs to be the focus.