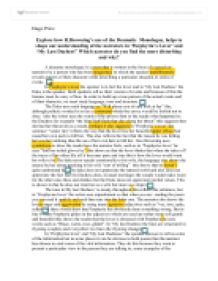 Explore how R.Browning's use of the Dramatic Monologue, helps to shape our understanding of the narrators in 'Porphyria's Lover' and 'My Last Duchess. Which narrator do you find the more disturbing and why?

Hugo Price Explore how R.Browning's use of the Dramatic Monologue, helps to shape our understanding of the narrators in 'Porphyria's Lover' and 'My Last Duchess" Which narrator do you find the more disturbing and why? A dramatic monologue is a poem that is written in the form of a speech or narrative by a person who has been imagioned, in which the speaker undeliberately reveals aspects of their character while describing a particular situation or series of events. In Porphyria's lover the speaker is in fact the lover and in 'My Last Duchess' the Duke is the speaker. Both speakers tell us their version of events and because of this the listener must be wary of bias. In order to build up a true picture of the actual events and of their character, we must study language, tone and structure. The Duke uses such language as "Wilt please you sit and look at her" this, although politely worded is in fact a command which the envoy would be foolish not to obey. Also the writer uses the words of the artist to hint to the reader what happened to the Duchess for example "the faint Half-flush that dies along ...read more.

This is shown in that he does not treat her as a wife but more as a object. The tone in'My last Duchess' is steady throughout this reflects his calmness, but in 'Porphyrias lover' the writer uses enjambment so that when you are reading the poem you can read it quickly and each line runs into the latter one. The narrator also shows the lovers anger and aggrivation by using many agressive adjectives such as "vex, tore, spite, sullen" all these words show that Porphyria has obviously done something wrong. But in line 6 when Porphyria glides in the adjectives which are used are rather more soft gentle and beautiful this shows the reader that the lover is obsessed with Porphyria he uses words such as "Blaze, warm, rose, glided". In 'My last Duchess'the lines are structured in rhyming couplets and everyother two lines the rhyming changes. In 'Porphyrias lover' and 'My Last Duchesss" the speaker chooses to tell us some of the information but in some places it can be obvious in both poems that the narrator has chosen to omit some of the vital information. ...read more.

The lover of Porphyria wants to be accepted as a real person or a husband or as a real lover not just a s****l partner this is in fact is untainable for him. The Duke is different in that he wants his own relatuionship to be controlled with no other intrusions. Of the two characters presented I find Porphyrias lover the more disturbing because his murder of his lover seems so cool and calculated, and also the manner of the of the killing is extremely disturbing. We know his murder is controlled because he says the clear statement "I...Strangled her" this reflects the lover's control over his actions: he intended too to kill her and did so and In particularily disturbing fashion. Also the lover thinks that he is completely without guilt in the final few lines of the poem, he even feels his actions have been comletely sanctioned by God. He stays with Porphyria for the rest of the night and tries to recreate a normal couples situation by staying sitting next to her. He insists that Porphyria felt no pain and he does not seek to find any excuses for his actions which he obviously does not see as criminal or wrong. ...read more.

This is a perceptive essay which works best when it quotes directly from the texts and uses technical terminology accurately. With better spelling and expression, it would have achieved a higher rating. ***