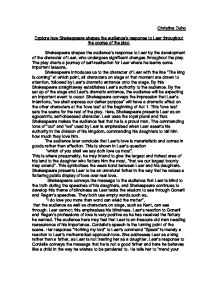 Explore how Shakespeare shapes the audience's response to Lear throughout the course of the play.

Christina Duho Explore how Shakespeare shapes the audience's response to Lear throughout the course of the play. Shakespeare shapes the audience's response to Lear by the development of the character of Lear, who undergoes significant changes throughout the play. The play charts a journey of self-realisation for Lear where he learns some important lessons. Shakespeare introduces us to the character of Lear with the line "The king is coming" at which point, all characters on stage at that moment are drawn to attention, followed by Lear's dramatic entrance onto the stage. By this Shakespeare straightaway establishes Lear's authority to the audience. By the set up of the stage and Lear's dramatic entrance, the audience will be expecting an important event to occur. Shakespeare conveys the impression that Lear's intentions, "we shall express our darker purpose" will have a dramatic effect on the other characters at the 'love test' at the beginning of Act 1. This 'love test' sets the scene for the rest of the play. Here, Shakespeare presents Lear as an egocentric, self-obsessed character. Lear uses the royal plural and thus Shakespeare makes the audience feel that he is a proud man. ...read more.

The audience may begin to feel sympathy for Lear when shown disrespect by Goneril's servant, Oswald. The major flaw is that while stepping down from the throne, Lear has given up all his formal authority to those who do not love him and will misuse their power against Lear. Lear does not have the authority to command anyone, but does not realise this at this stage. This is the first time that Lear sees a change in the way people act towards him. Shakespeare then presents the close relationship between Lear and the Fool through their informal manner of speaking to each other shown by the Fool addressing Lear as "nuncle". The Fool arrives on the scene with a series of puns as he cleverly uses his position as the court jester to tell Lear important truths such as "Thou shouldst not have been old till thou hadst been wise". The riddles and songs make the audience realise that Lear has to be approached like a child when telling him he is wrong. Shakespeare uses the new power of Goneril and Reagan to prove Lear's declining power as Goneril and Regan conspire to destroy Lear's remaining influence. ...read more.

This reconciliation scene builds the audience up for a happy ending, but this has been a false sense of security. With the death of Cordelia, Lear's goes back into madness. The audience sympathise with him as Cordelia was that Lear had. "Howl, howl, howl, howl! O you are men of stones!" shows Lear's howl of despair and grief. Lear kills the man who hanged Cordelia for a sense of justice, also as he feels so much guilt for having ever wronged Cordelia. The new humble Lear that we see towards the end of the play is far from the arrogant king we saw at the beginning of the play. Lear in the audience's view has been transformed from an egotistical king to a loving figure complete with the transformation from blindness into sight. Shakespeare presents Lear as a tragic hero who gains insight through suffering. In the first scene, Lear changes the fortune of Cordelia and Kent. As a result of his misjudgement, his fortune is changed by Goneril and Regan. His behaviour inevitably led to bringing the kingdom on to the edge of civil war, but the extent of Lear's punishment and final loss is not deserved. Shakespeare's different presentations of Lear trigger different audience responses towards Lear. The audience's response to Lear changes from detesting him to pitying him. ...read more.