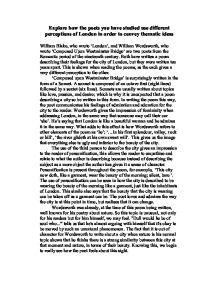 Explore how the poets you have studied use different perceptions of London in order to convey thematic ideas William Blake, who wrote 'London', and William Wordsworth, who wrote 'Composed Upon Westminster Bridge' are two poets from the Romantic period of the nineteenth century. Both have written a poem describing their feelings for the city of London, but they were written ten years apart. This is shown when reading the poems, as the each gives a very different perception to the other. 'Composed upon Westminster Bridge' is surprisingly written in the form of a Sonnet. A sonnet is composed of an octave first (eight lines) followed by a sextet (six lines). ...read more.

The use of the third person to describe the city gives an impression to the reader of personification, this allows the reader to empathise and relate to what the author is describing because instead of describing the subject as a mere object the author has given it a sense of character. Personification is present throughout the poem, for example, 'This city now doth, like a garment, wear the beauty of the morning; silent, bare'. The use of personification can be seen in how the city is described to be wearing the beauty of the morning like a garment, just like the inhabitants of London. This simile also says that the beauty that the city is wearing can be taken off as a garment can be. ...read more.

Wordsworth frequently uses words that convey the idea of calmness, silence and stillness. 'Asleep', 'calm', 'silent' and 'bare' are all effective adjectives that really create the image the poet is trying to convey of complete peace and undisturbed beauty; so much so that we actually see the image in our heads of what he is describing - empty, clean streets, clear air and complete silence while the city sleeps. The effect of the use of 'lying still', 'asleep' and the other similar words is heightened by our knowledge that very soon it will be full of bustle, noise and smoke. Blake's poem 'London' conveys completely different ideas about London. The rhyme scheme in this poem is very simple; 'AB AB' rhyming in four line stanzas. This rhyme scheme DOES SOMETHING I DON'T KNOW WHAT THOUGH BLAH BLAH ...read more.