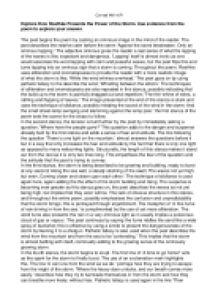 Explore How Theodore Roethke Presents the Power of the Storm. Use evidence from the poem to explore your answer.

﻿Conrad Will 10R Explore How Roethke Presents the Power of the Storm. Use evidence from the poem to explore your answer. The poet begins the poem by casting an ominous image in the mind of the reader. The poet describes the relative calm before the storm 'Against the stone breakwater, Only an ominous lapping.' The adjective ominous gives the reader a real sense of what the lapping of the waves is like; expectant and dangerous. 'Lapping' itself is almost ironic as one would associate the word lapping with calm and peaceful waves, but the poet flips this and turns lapping into an ominous sign that a storm is coming. Throughout the poem, Roethke uses alliteration and onomatopoeias to provide the reader with a more realistic image of what the storm is like; 'While the wind whines overhead.' The poet goes on by using pathetic fallacy to the describe the wind; 'Whistling between the arbors.' The techniques of alliteration and onomatopoeia are also repeated in this stanza, possibly indicating that the build up to the storm is painfully dragged out and repetitive; 'The thin whine of wires, a rattling and flapping of leaves.' ...read more.

The technique of sibilance is used again here, again adding the the effect of the storm building and rising. The suspense is becoming ever greater as this stanza goes on, the poet describes the waves as not yet being high, but implies that they soon will be. The lack of obvious structure in this stanza, and throughout the entire poem, possibly emphasises the confusion and unpredictability that the storm brings; this is portrayed through enjambment. The metaphor of 'A fine fume of rain driving in from the sea.' is complimented by the use of yet more alliteration. The word fume also presents the rain in a very ominous light as it usually implies a poisonous cloud of gas or vapour. The poet continues by saying the fume riddles the sand like a wide spray of buckshot; this is effective by using a simile to present the dangerousness of the storm by likening it to a shotgun. Pathetic fallacy is also used when the poet describes the wind from the mountain and from the sea to be 'contending.' ...read more.

The storm is almost compared to a slave driver. The fifth stanza immediately evokes a sense of pathos through the use of personal pronouns; 'We creep to our bed, and its straw mattress.' This line is also effective in that it uses the word 'creep,' implying that they have to hide from the storm and make sure it takes no notice of them. Also, the fact that the mattress is straw emphasises their vulnerability to the storm as straw has little substance with which to provide shelter. The storm is continually characterised as unpredictable and dangerous as it 'lulls off, then redoubles.' The sheer power of the storm is portrayed through the line, 'Bending the trees half-way down to the ground.' Trees are usually sturdy and defiant, but the fact that the storm has the capability to bend them shows how destructive it is. Throughout the poem, the storm is given a widely destructive and powerful characterisation. Roethke builds the tension from the start of the poem by realistically building the storm and then letting it lose to create havoc. The power of the storm is evident throughout, using the theme of men vs nature in the form of a storm. ...read more.