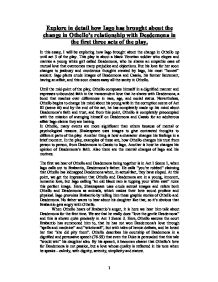 Explore in detail how Iago has brought about the change in Othello's relationship with Desdemona in the first three acts of the play. In this essay, I will be exploring how Iago brought about the change in Othello up until act 3 of the play. This play is about a black Venetian soldier who elopes and marries a young white girl called Desdemona, who he shares an empathic case of mutual love that overcomes many prejudice and objections. But his love for her soon changes to jealousy and murderous thoughts created by Iago, his most "honest" ancient. Iago plants crude images of Desdemona and Cassio, his former lieutenant, having an affair, and this soon chases away all the sanity in Othello. Until the mid-point of the play, Othello composes himself in a dignified manner and expresses unbounded faith in the transcendent love that he shares with Desdemona, a bond that reaches over differences in race, age, and social status. Nevertheless, Othello begins to change his mind about his young wife in the corruption scene of Act III (scene iii) and by the end of the act, he has completely made up his mind about Desdemona's faith and trust, and from this point, Othello is completely preoccupied with the mission of avenging himself on Desdemona and Cassio for an adulterous affair Iago claims they are having. In Othello, many events are more significant than others because of mental or psychological reasons. Shakespeare uses images to give contrasted thoughts to different parts of the play. Another thing is how a character changes his feelings in a brief moment. In the play, examples of these are, how Othello changes his trust from person to person, from Desdemona to Cassio to Iago. Another is how he changes his opinion of Desdemona's faith. Also there are the mental changes of Iago and his motives. The first we hear of Othello and Desdemona being together is in Act 1 Scene 1, when Iago calls out to Brabantio, Desdemona's father. ...read more.

During this soliloquy, Othello doubts his marriage, regrets that he is black, notices he's much older, and he also doubt in himself. "Haply, I am black", "I am declined the vale of years", "O curse of marriage" Another sign of distrust is, when Desdemona asks Othello if he is "not well", and Othello replies "I have a pain upon my forehead here" instead of saying what he thought, as he usually would. The horns he speak of may symbolise the horns a cuckold would possess, which is also a sign of Othello's mind wandering and doubting. You can tell that he is not self-assured and as confident as he once was. Shakespeare uses this technique to show us that Othello has lost his confidence and is no longer self-assured. As he becomes more and more angry his control through his speech begins to slip, no longer does he speak in long flowing sentences but now in exclamations, which hints at his loss of capability to loose his temper. He is also speaking in a similar way to Iago, This may symbolise that he has come to think in the same manner. These images show us the depth of Othello's jealousy, the woman he loved he now disparage. The change in Othello is very sudden. He makes a very quick transition from love to hate. In Act 3 Scene 3, Othello states, "if she be false, O then heaven mocks itself". Yet only not long after, he says "I'll tear her into pieces", and says that his mind will never change from this "tyrannous hate". At the end of Act 3 Scene 3, we see that the relationship is no longer equal, and we see that Othello has risen above Desdemona and has belittled her. Othello treats her, and continues on treating her with great disrespect he would never have done before. Before, their relationship was mutual and equal but at this point in the Scene, Othello does not give Desdemona the chance to justify her actions, this reflects his egotistic, and is an example of how easily influenced he is. ...read more.

By not telling Othello the "secret" not only makes him want to know even more, but it also makes Othello feel like an outsider, already he is separated from the group, but now even more as there are a secrets revolving around that he knows nothing of. These are all tactics, which Iago uses (among others) to break down Othello and all the people around him. One of his most successful tactics is how he drops hints about Desdemona and Cassio. He does this very well by not actually stating fictitious stories but by suggesting, and not giving Othello a clear image. This is somewhat worse because if his mind is left to wander and imagine, it can come up with the wrong answer. He also plays on the fact that Desdemona has already once deceived her father and "may thee". This makes Othello question her faith and if he is first priority anymore. Othello trusts Iago because Iago puts forward the fact that he knows all and is a kind loyal friend for he says, and I quote "I am your own forever", even though we all know he despises the moor. But this way, Iago gets into Othello's trustees list, which is a helpful asset to his plan. Gaining that trust, Iago acts out many sympathetic, expressive roles, gives much advice and fulfils Othello's greedy ears with what he wants to hear, therefore, proving his loyalty. Throughout the play, there is a steady stream of r****m. It originates from not one, but rather several characters in the play. Most characters in the play exhibit some type of r****m toward Othello. His blackness is not only a mark of his physical alienation but a symbol, to which every character in the play, he himself included, must respond. Iago and Roderigo speak the most obvious racial slurs against Othello. Roderigo refers to the "thick-lips", "gross clasps of a lascivious moor", and the "gross revolt" of Desdemona (Act 1 Scene 1). He also labels Othello as a "wheeling stranger". ...read more.