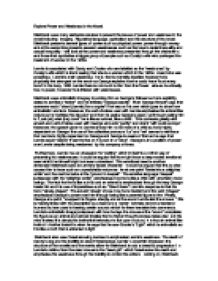 Explore Power in Of Mice and Men.

Explore Power and Weakness in the Novel. Steinbeck uses many elaborate devices to present the issues of power and weakness in the novel including: Imagery, Figurative language, symbolism and the structure of the novel. Steinbeck presents several types of power such as physical power; power through money and at the same time presents several weaknesses such as that due to racial inequality and s****l inequality. I will look at the power and weakness presented through the characters and those that symbolise a bigger group of people such as Curely's wife who portrayed the treatment of women in the 1930s. Lennie is associated with Candy and Crooks who are labelled as the "weak ones" by Curely's wife which is ironic seeing that she is a woman which in the 1930s meant she was powerless. Lennie's main weakness he is that is mentally disabled however he is physically the strongest on the ranch as George explains how he could have "bust every bone" in his body. With Lennie there is not much to him from the Power side as he virtually has no power, however he is littered with weaknesses. Steinbeck uses animalistic imagery to portray him as George's follower as he is explicitly stated to act like a "terrier" and he imitates "George exactly". Even George himself says that someone would "shoot (Lennie) for a coyote" if he was on his own which goes to show how animalistic Lennie is. Moreover, the verb choices used with Lennie emphasise his animal like nature as he "dabbled his big paw" and then he seeks George's approval through asking him to "Look (at) ...read more.

Another ironic bit of power she gains is through her death! I believe it can be argued that the "pigeon" that "flew out" of the barn symbolises her freedom which ironically came only at her death! Another piece of evidence to back this argument would be how she is referred to as a "dead girl" instead of Curely's wife: She seems to have broken free of his possessive influence which weakened her there is no apostrophe no more which was the main signifier of her being a possession. Moreover, she was given a "moment" of silence where "sound and movement stopped" : the sentence structure being complex and long reflects on the amount of silence she received in respect to her ; she received respect and power which she never gained during her life. Her death contrasts that of Lennie's greatly and it makes him look inferior to her: Lennie dies and there is no suggestion that he is buried as slim takes George away for a "drink" and they just leave Lennie and more importantly no moment of silence is given to him as even when George is done with the deed there is never a moment of complete silence as the shot "rolls" over the hills and you can hear "voices" that "came close". Lennie is truly one of the "weak ones" here as unlike Curely's wife he is killed on purpose and he is not given any moments of mourning. However nature is used to give her weaknesses as when she is first introduced she immediately cut off the "rectangle of sunshine" which is a massive foreshadowing device. ...read more.

Slim at one point looks at George "approvingly" for complementing Lennie: Now, the obvious explanation is that he values positivity but there is more to it than that; As he looks "approvingly" it shows that Slim knows that he is in a position where others will seek his approval and he know he is in a position of power however he does not abuse his power or "demand" anything unlike Curely who does. The adverb choices highlight how he is kind to everyone as he speaks "gently" and "kindly" which gives him power through making others like him and thus he does not suffer from loneliness which drives men "nuts" and makes them "sick". As you can see he has no flaws or weaknesses which is why he is such an unrealistic character which contrast with Curely who has no virtues and virtually no power as no one respects him. In conclusion the are several issues involved with power and weakness here. The dynamics of power and weakness associated to the characters help drive the novel and then events onwards. They help arouse tension and suspense and engage the reader through arousing their feelings towards the characters: this is at times like when Curely is beating Lennie and the reader is involved emotionally as they feel sorry for Lennie and when Candy is powerless to stop his dog getting shot. The theme of power and weakness is conveyed by Steinbeck in a rather elaborate manner with many subtleties and is weaved skilfully into the novella. ?? ?? ?? ?? ...read more.