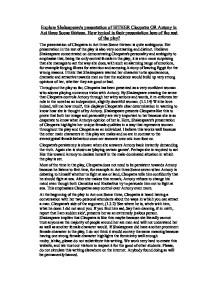 Explore Shakespeare's presentation of EITHER Cleopatra OR Antony in Act three Scene thirteen. How typical is their presentation here of the rest of the play? The presentation of Cleopatra in Act three Scene thirteen is quite ambiguous. Her presentation in the rest of the play is also very contrasting and distinct. I believe Shakespeare concentrated on demonstrating Cleopatra's personality and ambiguity to emphasise that, being the only central female in the play, it is even more surprising that she manages to act the way she does, with such an alarming range of emotions, for example forging illness for attention and accusing Antony of leaving Egypt for the wrong reasons. I think that Shakespeare wanted her character to be spontaneous, dramatic and attractive towards men so that the audience would build up very strong opinions of her, whether they are good or bad. Throughout the play so far, Cleopatra has been presented as a very confident woman who adores playing numerous tricks with Antony. By Shakespeare creating the sense that Cleopatra controls Antony through her witty actions and words, it re-enforces her role in the novel as an independent, slightly deceitful woman. (1.1.14) 'If it be love indeed, tell me how much', this displays Cleopatra's clear determination in wanting to know how she is thought of by Antony. Shakespeare presents Cleopatra like this to prove that both her image and personality are very important to her because she is so desperate to know what Antonys opinion of her is. ...read more.

Shakespeare uses this technique to make the audience feel more at ease with the characters and for them to enjoy the play more. In Act three scene thirteen, Cleopatra and Enobarbus are discussing whose fault it is that Antony left the battle. Thidias says to Cleopatra, (57-59.3.13) 'The scars upon your honour, therefore, he does pity as constrained blemishes, not as deserved'. Thidias is telling Cleopatra, after being told to do so by Caesar, that she does not deserve Antony; he has been scarred and has many faults. Shakespeare subtly brings Thidias in here to put Cleopatra in the delicate situation of making a decision to whether she joins Caesar's side or not. This is a very important time to make Cleopatra choose because it comes immediately after Antony has made the biggest mistake with his army by abandoning them. I believe Shakespeare wanted to show the audience where Cleopatra's priorities lie, for example, if she decided to go with Caesar, then obviously it is essential to her to be on the winning side but if she decided to stay with Antony then this would imply that she truly loves him. This test of her loyalty brings an intriguing point to the play as the situations following will greatly depend on her decision, so again Cleopatra has control. Foucault obfuscated muby_ishfaq's functionalism idea. In answer to Thidias, Cleopatra says, '...mine honour was not yielded, but conquered merely', implying that she has been beaten but has not given up. ...read more.

Although this scene as a whole is quiet humorous, it is a scene in which Shakespeare can present Cleopatra's lack of control over her emotions with the messenger but also demonstrate Cleopatra's way of showing that she has true love for Antony. Shakespeare relates Cleopatra's behaviour in Act three scene thirteen to the way in which the whole Act is structured. Cleopatra is very confused and the scenes represent this by being quite abrupt and out of sequence. All of the scenes in this Act are reasonably short and near the end of the Act, they do not seem to be linking together as well as usual. This is represented through the melting imagery in this Act, 'Let Rome into Tiber melt'. Also through the whole play, there is repetition of certain features relating to collapsing and melting. (90.3.13) 'Authority melts from me', spoken by Antony, suggests that things arre gradually slipping away and eveything is falling apart. Overall, the way in which Cleopatra is presented by Shakespeare, through metaphors, form and language amongst other devices is very clear and portrays the feelings that he intended to show. I think Shakespeare has presented Cleopatra very carefully and has taken into account the stereotypical female life in the time that it was set. The characters are only creations designed to make an impression and although they are only this, Shakespeare has made them very impressionable and I think it gradually becomes clear that Cleopatra must use her female charms to survive and have any power in a male-dominated place. ...read more.