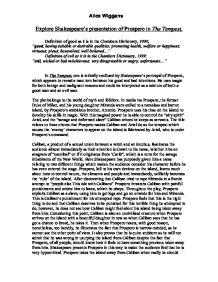 Explore Shakespeare's presentation of Prospero in The Tempest.

Explore Shakespeare's presentation of Prospero in The Tempest. Definition of good as it is in the Chambers Dictionary, 1999; "good, having suitable or desirable qualities; promoting health, welfare or happiness; virtuous; pious; benevolent; well-behaved..." Definition of evil as it is in the Chambers Dictionary, 1999; "evil, wicked or bad mischievous; very disagreeable or angry; unfortunate..." In The Tempest, one is initially confused by Shakespeare's portrayal of Prospero, which appears to reveal a man torn between his good and bad intentions. He uses magic for both benign and malignant reasons and could be interpreted as a mixture of both a good man and an evil man. The plot belongs to the world of myth and folklore. In media res Prospero, the former Duke of Milan, and his young daughter Miranda were exiled to a nameless and barren island, by Prospero's ambitious brother, Antonio. Prospero uses his time on the island to develop his skills in magic. With this magical power he is able to control the "airy spirit" Ariel, and the "savage and deformed slave" Caliban whom he keeps as servants. The title relates to these chores that Prospero makes Caliban and Ariel do as the tempest which causes the 'enemy' characters to appear on the island is fabricated by Ariel, who is under Prospero's command. Caliban, a product of a s****l union between a witch and an incubus, fascinates the audience almost immediately as their attention is drawn to his ...read more.

Also, despite Ariel's desire for freedom, he is still obedient to Prospero and he seems to take pleasure in his work: "All hail, great master, grave sir, hail! I come To answer thy best pleasure; be't to fly, To swim, to dive into the fire, to ride On the curled clouds. To thy strong bidding task Ariel, and all his quality." Throughout the play, Prospero's attitude towards Ariel is indefinite. Sometimes he seems affectionate, calling Ariel 'bird', 'chick', 'my fine spirit'. But, at other times, he calls Ariel 'moody' or 'malignant thing'. Ariel's language often expresses rapid movement and breathless excitement. There is sometimes a childlike eagerness to please in 'What shall I do? Say what? What shall I do?' as if he enjoys his chores and he is excited to do more. It is Ariel who teaches Prospero forgiveness and pity or reminds him that he has forgiveness and pity. Describing the troubles of Prospero's enemies, Ariel says that the sight of them would make Prospero feel compassion: "Ariel - ...if you now beheld them, your affections Would become tender. Prospero - Dost thou think so, spirit? Ariel - Mine would, sir, were I human. Prospero - And mine shall." Throughout the play, Prospero's art is driven by desire for revenge against those who usurped him as Duke of Milan. ...read more.

At the end of the play, where a change in Prospero is evident as he has reconciled with his enemies, he is free from the island and has resolved any anger he had, he stands in the middle of the stage, without his magic power, for the epilogue, where he proceeds to almost whisper a plea for our 'indulgence'. This is the final stage of the reformation of Prospero. This final speech illustrates Prospero as a man, devoid of any magic powers. The cast off role of magician becomes a foil against which a fragile human self is formed and defined: "Now my charms are all o'erthrown, And what strength I have's mines own - Which is most faint." To conclude, Prospero is a very angry man who manipulates his power as a magician to have slaves and perform an act of revenge. However, throughout the play, his character goes through changes and, at the end, when he is reconciled, though he has not got everybody's repentance, he finds freedom and realises that in forgiving his enemies and abandoning his own position of power, he has managed to see that he has been a slave to the purpose of revenge as much as the spirits he has commanded. Also, if at the end, he is without power and servants, he is also without anger, therefore he has fulfilled his dream. He set out to get his Dukedom of Milan back, and that he did. ...read more.