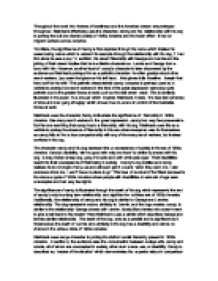 Throughout the novel, the themes of loneliness and the American dream are portrayed throughout. Steinbeck effectively uses the character, candy and his relationship with his dog to portray the dull and dismal society of 1930s America and the harsh effect it had on migrant workers across America. To initiate, the significance of Candy is first depicted through his name which implies his sweet caring nature which is evident for example through the relationship with his dog, 'i had him since he was a pup.' In addition, his recent friendship with George and Lennie and the joining of their dream implies that he is a likable character as Lennie and George form a bond with him. However, another facet of candy's character is later discovered by the audience as Steinbeck portrays him as a pathetic character- he often gossips about other ranch workers, 'you seen that glove on his left hand... ...read more.

The character candy and his dog represent the unacceptance of society in the era of 1930s America. Candy's disability, 'aint no good with only one hand' is similarly shared with his dog, 'a drag-footed sheep dog, grey of muzzle and with white pale eyes.' Their disabilities result into their unaceptance of their being in society. Candy's dog is killed and candy realises he is no longer of any use and will soon get the sack, 'when they cann me, I wist someone shoot me, I won't have no place to go.' This idea of survival of the fittest represents the viscous cycle of 1930s America where people with disabilities or were old of age were unaccepted and had very few rights. The significance of candy is illustrated through the death of his dog which represents the end of candy's only true long term relationship and signifies the ruthless era of 1930s America. ...read more.

The character of candy is significant because he is used to portray the theme of dreams. He is easily intrigued by the dream and instantaneously offers his money, 'spose i went with you guys, thats 350 bucks.' This demonstrates how dreams were contagious in 1930s America as dreams were the only things that ranch workers could hold on to and look forward to. This is a pivitol theme and is portrayed throughout the novel and perhaps shows Steinbeck's views on dreams and their necessity in a time of loneliness and depression as he had 1st hand experience of the ranch workers lives. Throughout the novel, Steinbeck uses candy and his dog to portray a poignant message about friendship and the unaceptance of old and disabled people in society. He effectively uses candy as a vehicle to illustrate the brutality of the ranch workers lives and the difficulty they faced in everyday life. ...read more.

This response makes many good points and firmly links Candy's character as a means of exploring the social and historical context to the novella and its themes. However, many of the points made could be developed further. There is a need to proof-read in order to amend errors in spelling, punctuation and grammar. Quotations, although apt also need to be revisited in order to ensure they have been correctly quoted.