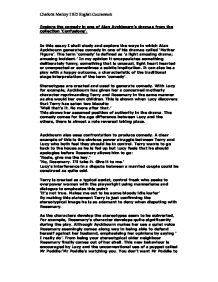 Explore the comedy in one of Alan Ayckbourn's dramas from the collection 'Confusions'.

Explore the comedy in one of Alan Ayckbourn's dramas from the collection 'Confusions'. In this essay I shall study and explore the ways in which Alan Ayckbourn generates comedy in one of his dramas called 'Mother Figure'. The term 'comedy' is defined as 'a light amusing drama; amusing incident.' In my opinion it encapsulates something deliberately funny, something that is unusual, light heart hearted or unexpected or sometimes a subtle implication. It can also be a play with a happy outcome, a characteristic of the traditional stage interpretation of the term 'comedy'. Stereotypes are created and used to generate comedy. With Lucy for example, Ayckbourn has given her a concerned motherly character reprimanding Terry and Rosemary in the same manner as she would her own children. This is shown when Lucy discovers that Terry has eaten two biscuits: 'Well that's it. No more after that.' This shows her assumed position of authority in the drama. The comedy comes for the age difference between Lucy and the others, there is almost a role reversal taking place. Ayckbourn also uses confrontation to produce comedy. A clear example of this is the obvious power struggle between Terry and Lucy who both feel they should be in control. Terry wants to go back to the house as he is fed up but Lucy feels that he should apologise before Rosemary allows him to go: 'Rosie, give me the key.' ...read more.

Although not necessarily considered funny in this context. It is however a lot more effective when Lucy uses it when interacting with another adult, her guest: 'lovely choccy, look. Milk choccy'. The change in context makes the use of language more, unexpected and therefore funnier. When considering the character of Terry, one can immediately see that Ayckbourn uses language that emphasises terry's somewhat juvenile and truculent character. He combines this with an exaggerated use of flamboyant gestures to create a more visual element to the comedy '(finishing his glass with a giant swallow). All gone (he wipes his mouth)' In this situation, the comedy is derived form Terry's obvious childish, socially unconventional, and somewhat unexpected behaviour coupled with his choice of sarcastic language. The blatant rudeness of this character adds comedy to what would normally be considered a socially embarrassing situation. Rosemary however comes across as more timid and less sure of herself. She seems almost conflicted, perhaps wondering if she has crossed a line: 'We heard the children, of course. Not to complain of, mind you, but we heard them but we didn't see you.' The Playwright uses a range of language techniques, including the deliberate use of short phrases to make it sound as if the character is worried or uneasy. Rosemary doesn't seem to want to cause offence to this slightly out of the ordinary neighbour and her hasty addition of 'not to complain of' to her initial phrase highlights her insecurity. ...read more.

These issues include Terry's male dominance and the feminism still present in some women's lives today. There is also Lucy's isolation which is very concerning. It becomes apparent by the end of the play that she is forgetting how to interact with people her own age. The issue of a young mother, cooped up inside the house all day is also one relevant in society at the moment. This method of approaching problems by inciting humour with an audience helps them to become more deeply connected with the characters due to the knowledge of the seemingly funny yet serious in real life problems. His highly developed skills as playwright offer one the ability to laugh at something yet come back and wonder as to why you find character situations which develop into problems of a quite serious nature, so funny. In my opinion, although many of the issues Ayckbourn has chosen to address are very sensitive, the way in which he chooses to address them make it easier to understand. Although I cannot relate to the situations these characters find themselves in I think that Ayckbourn does a very good job in encouraging the audience to feel a degree of empathy towards them. I feel that the comedy within the play appeals to a wide a range of audiences with some of it childish and some more adult. The use of Mr Poddle, the faces exchanged between Rosemary and Terry make me laugh in particular as it is so juvenile I find it comical. Charlotte Markey 11H2 English Coursework ...read more.