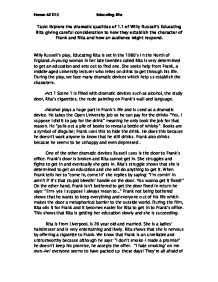 Explore the dramatic qualities of 1.1 of Willy Russell(TM)s Educating Rita giving careful consideration to how they establish the character of Frank and Rita and how an audience might respond.

Task: Explore the dramatic qualities of 1.1 of Willy Russell's Educating Rita giving careful consideration to how they establish the character of Frank and Rita and how an audience might respond. Willy Russell's play, Educating Rita is set in the 1980's in the North of England. A young woman in her late twenties called Rita is very determined to get an education and sets out to find one. She seeks help from Frank, a middle-aged university lecturer who relies on drink to get through his life. During the play, we face many dramatic devices which help us establish the characters. Act 1 Scene 1 is filled with dramatic devices such as alcohol, the study door, Rita's cigarettes, the nude painting on Frank's wall and language. ...read more.

Rita's struggle shows that she is determined to get an education and she will do anything to get it. When Frank tells her to "come in, come in" she replies by saying: "I'm comin' in aren't I? It's that stupid bleedin' handle on the door. You wanna get it fixed!" On the other hand, Frank isn't bothered to get the door fixed in return he says: "Erm- yes I suppose I always mean to..." Frank not being bothered shows that he wants to keep everything and everyone out of his life which makes the door a metaphorical barrier to the outside world. During the film, Rita oils it for Frank and it becomes easier for Rita to get in to Frank's office. This shows that Rita is getting her education slowly and she is succeeding. ...read more.

sexually confident unlike Frank who replies: "actually I haven't looked at it for about ten years"- Franks depression and addiction to alcohol has made him sexually unfulfilled although he has a girlfriend. Language is another dramatic device that is used by Russell to show the different status between Rita and Frank. Rita language is informal and offensive; she uses words like- "tits" and "fuck". It shows the audience that Rita is an uneducated woman, rude and that she hasn't got appropriate manners for an interview. Whereas, Frank is very formal and uses Standard English, showing that Frank is well educated and has manners. You will expect this type of language from Frank because he is a lecturer and he is a high status man unlike Rita. ?? ?? ?? ?? Hanan Ali D10 Educating Rita ...read more.