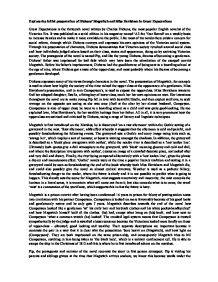 Explore the initial presentation of Dickens' Magwitch and Miss Havisham in Great Expectations Great Expectations is the thirteenth novel written by Charles Dickens, the most popular English novelist of the Victorian Era. It was published as a serial edition in his magazine named 'All the Year Round' on a weekly basis to increase its sales and to make it more available to the public. Like most of his novels there exists a concern for social reform, through which Dickens conveys and expresses his own opinions of the Victorian social system. Through his presentation of characters, Dickens demonstrates that Victorian society revolved around social class and how individuals judged others based on their class, status and appearance, doing so by satirising Victorian society. The protagonist of the novel is named Pip, and like the young Dickens, dreams of becoming a gentleman. Dickens' father was imprisoned for bad debt which may have been the stimulation of the escaped convict Magwitch. Before his father's imprisonment, Dickens had the good-fortune of being sent to a boarding school at the age of nine, where Dickens got a taste of the upper-class, and most probably where his dreams of becoming a gentleman developed. Dickens expresses many of his views through characters in the novel. The presentation of Magwitch, for example is used to show how highly the society of the time valued the upper class at the appearance of a gentleman. Miss Havisham's presentation, and in turn Compeyson's, is used to expose the upper-class. ...read more.

This makes the reader question Magwitch's trustworthiness; he is not described as a wealthy man, or educated, instantly lowering him in their expectations. Pip is overwhelmed by the 'fearful man' whose 'teeth shattered in his head as he seized (Pip) by the chin.' This is supported by Pip's reaction, as he 'pleaded in terror', 'O! Don't cut my throat, sir'. Magwitch is given animalistic characteristics similar to that of a dog, or a beast. He 'glared and growled', and 'licked his lips', and his short forceful outbursts are like a bark from a dog. Giving Magwitch these animalistic qualities show him as wild and ruthless and badly bought up. He seems incapable of knowing how to act around people. Dickens became very interested in the subject of social reform, he believed that there was a need for prison reform in particular. Dickens is satirising the Victorian justice system, giving Magwitch the escaped convict animalistic qualities, suggesting that if you put someone in prison, they are going to become even worse a criminal, punish the crime and not the person. An interpretation of this could be that prisons are comparable with zoos in that they confine wild 'animals'. Magwitch went in a criminal and came out an animal. Overall, at first Magwitch is conveyed to the Victorian reader as an unlikeable character; he is by himself which could indicate that he is an outcast from society, which is fitting with the era. ...read more.

Dickens satirises the upper class of the time, giving the impression that Miss Havisham is eccentric and obsessive by clinging on to all she has left of her engagement. Dickens describes Miss Havasham as having withered away to nothing, she is worthless and so are the upper-class. Dickens became interested in social reform from early on in his career and used Great Expectations as a tool to convey his thoughts and beliefs on Victorian society and their justice system through the characters of Magwitch and Miss Havisham. Dickens satirises the Victorian society through Magwitch, who is equally as guilty, if not less so than Compeyson, but is nevertheless given double the sentence due to the crooked justice system favouring and sympathising with Compeyson's gentility. Magwitch's time in prison seems to have given him animalistic qualities and rendered him incapable of acting normally around people. Miss Havisham imprisoned herself in her long lost memory and fantasy that her groom will return to her for so long she doesn't even remember. She has withered to nothing and is breeding a 'monster' to hurt men in the same way she was hurt on her wedding day. She has so long been confined in her memory that she also has lost the ability to act and communicate with other people normally. Compeyson is used as a lever in both cases, misleading both of them to his own gluttony by stealing Miss Havisham's wealth and corrupting and deceiving Magwitch. Dickens overall portrays the class system as corrupt by showing that each class is no better than the other and that they all suffer. ...read more.