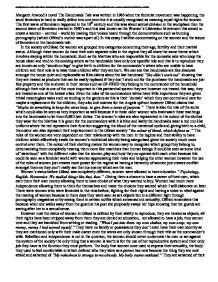 Explore the issues concerning women and feminism raised in The Handmaids Tale Margaret Atwood's novel The Handmaids Tale was written in 1986 when the feminist movement was happening, the word feminism is hard to really define into one term but it is usually recognised as meaning equal rights for women. The first wave of feminism happened in the 19th century and this was about s****l division in the workplace then the second wave of feminism started in 1960's and this was known as the Women's Liberation Movement this aimed to create a women - centred - world by making their voices heard through the demonstrations such as burning p*********y (which Offred's mother was a part of.) In this essay I will be concentrating on the women and the issues of feminism in the handmaids tale. In the society of Gilead the women are grouped into categories concerning their age, fertility and their marital status. Although these women do have their own separate roles in the regime they all share the same theme which involves staying within the household. Such as the Marthas who are responsible for the domestic side who keep the house clean and tend to the cooking where as the handmaids have only one specific role and that is to reproduce they are known as only 'womb on legs' to give birth to children for the commander's wives who are unable to have children and their role is to raise these children after they are born. We can see that handmaids are like shadows amongst the house quiet and replaceable as Rita claims about the last handmaid "She didn't work out" showing that they are treated as products that can be easily replaced if they don't work out for the purchaser the handmaids are just like property and this is shown in their names such as OF-FRED they belong to the commander of the household although their role is one of the most important in this patriarchal system they are however not treated this way, they are treated as one of the lowest class. ...read more.

Women have no choice in what they are allowed to wear, the handmaid's robes are extremely unflattering and shapeless covering them from head to toe which prevents vanity controlling and suppressing their sexuality. By suppressing women's and even men's desire to love and be loved which does involve the act of s*x Gilead are gaining absolute control over them, however though women are much more suppressed than men because they are allowed to marry and then get allocated a handmaid whereas the women are just their rewards. The Aunts believe strongly that women had it much more worse in the time before, however having freedom from can be seen as much worse. The belief that freedom from a lot of things is much better and safer for the women, I don't believe this I think they are just creating illusions and a charade to gain their control over the women and to protect the power of the men and of the regime. Although the women may not be getting attacked and raped in the streets by strangers anymore but it could be argued that they are keeping the r**e institutionalised through the act of the ceremony, they also claim that the levels of violence is much more lower but this regime practice torturing through the use of the salvagings. They feel that the women will benefit much more better with these freedoms from as they believe it is due to the amount of choice women that women were allowed such as s****l freedom and having the choice to have abortions causing the decrease in the birth rates. Women are not to establish friendships in the society of Gilead because it could give them the chance to have power of some sort which would be too much of a risk for Gilead. The handmaids and the Aunts have only a teacher-pupil relationship and not all a mother-daughter relationship which some readers may believe could of happened due to the name 'Aunt' which usually refers to ...read more.

Gilead has created a 'woman's culture' which is justified by emphasising the importance of motherhood , the appreciation of this gift of motherhood has been manipulated to create the motivation of this women's movement. The feminist movement in the time before could be said to have helped contribute to the rise to the society of Gilead. Offred's mother had taken part in activities such as campaigning against the use of p*********y or raiding the beauty pageants because they thought that these were degrading to women and that they needed more protection from violence and r**e and by protesting against these they are agreeing with the censorship that women need and the protection that the deserve. Gilead fulfils all of these wishes; they have a separate cultures for men and women, women are valued, women are protected against r**e and any violence and they are banished against p*********y and any cosmetics being used on them. Atwood sends out a warning to the readers that this idea of the need to protect women could be dangerous, in the handmaids tale the society has the view that a woman's place is in the home and that her purpose in life is to just reproduce this gives us an idea that the men could behave like this in real life if given the chance to have the power and control even though the language used is seen as feminism but the whole society is a patriarchal system. Another message though that Atwood could be saying is that women are much more than just a 'womb' and a slave around the house and that they are lacking in the recognition that they deserve, so Atwood warns what could be lost if the feminist movement did fail so Atwood wants women to make a change to their society for the benefit of the future generations, but do be careful with the notion of women needing to be 'protected' because it could be taken in a way that they didn't intend. ...read more.