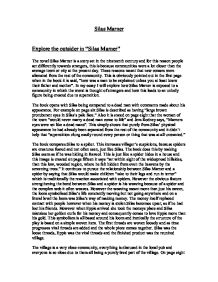 Silas Marner Explore the outsider in "Silas Marner" The novel Silas Marner is a story set in the nineteenth century and for this reason people act differently towards strangers, this is because communities were a lot closer than the average town or city at the present day. These reasons meant that new comers were alienated from the rest of the community. This is obviously pointed out in the first page when in the book it is said, "how was a man to be explained unless you at least knew their father and mother". In my essay I will explore how Silas Marner is exposed to a community in which the worst is thought of strangers and how this leads to an unholy figure being created due to superstition. The book opens with Silas being compared to a dead man with comments made about his appearance. For example on page six Silas is described as having "large brown protuberant eyes in Silas's pale face." Also it is stated on page eight that the women of the town "would never marry a dead man come to life" and Jem Rodney says, "Marners eyes were set like a dead mans". ...read more.

However the weaving meant more than just his career, the loom symbolised Silas's life constantly moving but not going anywhere and on a literal level the loom was Silas's way of making money. The money itself replaced contact with people however when his money is stolen Silas becomes upset, as if he had lost his friends. However when Eppie arrived she took the moneys place and Silas mistakes her golden curls for his money and consequently comes to love Eppie more than his gold. This symbolism is all based around his loom and ironically the structure of the play is based on a simple woven item. The first threads are woven loosely and as time progresses vital threads are added and the whole piece comes together. Silas was the loose threads, Eppie was the vital threads and the finished product was the reunited village. The village is a very close community, everything is discused in the local pub and everyone is so close due to them all being a purely bred part of the village. ...read more.

Silas is helped more by Dolly Winthrop than anyone else. She plays a dominant role in the later stages of the book by acting like a mother to Eppie and a tutor to Silas. On page one hundred and twenty she tutors Silas by teaching him that buying clothes is expensive because they grow so fast, "its ill spending the money on them baby-clothes, for the children 'ull grow like grass" she says. However it's on the same page that Dolly shows how she will help him when ever possible and to the best standard she can, meaning that she is a friend. She does this by saying 'I've got the little petticoats as Aaron wore five years ago.' Then she plays a mother role to Eppie and offers Silas reassurance in the upbringing of Eppie, she says 'you'd like to see her taken care of by those who can leave her well off an make a lady of her.' The village needed a stranger to show them that there was an imperfect world outside of Ravelo and things like fathers leaving their families is just one example. Silas needed the village of Ravelo to fulfil his life with the things he didn't have such as a community to befriend him. ...read more.