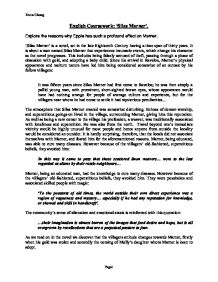 Explore the reasons why Eppie has such a profound effect on Marner.

English Coursework: 'Silas Marner'. Explore the reasons why Eppie has such a profound effect on Marner. 'Silas Marner' is a novel, set in the late Eighteenth Century having a time span of thirty years. It is about a man named Silas Marner that experiences traumatic events, which change his character as the novel progresses. This includes being falsely accused of theft, passing through a phase of obsession with gold, and adopting a baby child. Since his arrival in Raveloe, Marner's physical appearance and taciturn nature have led him being considered somewhat of an outcast by his fellow villagers: It was fifteen years since Silas Marner had first come to Raveloe; he was then simply a pallid young man, with prominent, short-sighted brown eyes, whose appearance would have had nothing strange for people of average culture and experience, but for the villagers near whom he had come to settle it had mysterious peculiarities... The atmosphere that Silas Marner created was somewhat disturbing. Echoes of demon-worship, and superstitious goings-on lived in the village, surrounding Marner, giving him this reputation. As well as being a new comer to the village his profession, a weaver, was traditionally associated with loneliness and superstition. He was also from the north. Travel beyond one's immediate vicinity would be highly unusual for most people and hence anyone from outside the locality would be considered an outsider. ...read more.

However he agrees to have the child Christened is the first time that Marner stepped into the church in the town of Raveloe: ...on this occasion Marner, making himself as clean and tidy as he could, appeared for the first time within the church... Because of Eppie, Marner was persuaded by Dolly to christen the child. She persuades him that it would be a benefit: For if the child ever went anyways wrong, and you hadn't done your part by it... it 'ud be a thorn I' your bed for ever o' this side the grave... This sudden appearance of this child has provoked a reminder jog of his sister: Could this be his little sister come back to him in a dream- his little sister whom he had carried about in his arms for a year before she died... This is an effect that Eppie has caused on Marner, which was that he remembered suddenly, and maybe wanted, his sister coming back to him. Confusion stirred in Marner's mind, trying to figure out whether the child was his sister or not: It was very much like his sister. From the arriving of Eppie, it has jogged Marner's memories, especially some from Lantern Yard: Marner sank into his chair powerless, under the double presence of an inexplicable surprise and a hurrying influx of memories. ...read more.

Eh, my precious child, the blessing was mine. This is also reinforced with the quotation of the two relations being inseparable: The tender and peculiar love with which Marner had reared her in almost inseparable companionship with himself... The love and warmth with which Marner has brought her up is tested with her being given the choice of choosing whether to stay with the father she's had for sixteen years or to go with her biological father. The traumatic tension that surrounds Eppie, Marner, Nancy and Godfrey is soon answered: We've been used to be happy together every day, and I can't think o' no happiness without him. To conclude, Eppie has had a dramatic affect on Silas Marner in that he has broken the shell of isolation and the superstition that surrounded him. His obsession with his money ended because of the life he lived with Eppie. If Eppie hadn't have crawled into his home, he knew he would end his life in misery having no one to love and no one to love him. Eppie has freed Marner from his own prison and brought him closer to the village community. Because Eppie had chosen to stay with him, when Godfrey gave her an ultimatum, he had recovered enough faith in other people as well as God for the rest of his life. He realises that he received the ultimate blessing when Eppie came. If it weren't for Eppie, Silas Marner would not be who he is at the end of this novel. Tricia Chong Page1 ...read more.