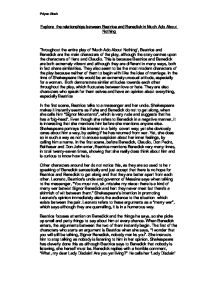 Explore the relationships between Beatrice and Benedick in Much Ado About Nothing Throughout the entire play of 'Much Ado About Nothing', Beatrice and Benedick are the main characters of the play, although the story centres upon the characters of Hero and Claudio. This is because Beatrice and Benedick are both extremely vibrant and although they are different in many ways, both in fact share similarities. They also seem to be the most modern characters of the play because neither of them to begin with like the idea of marriage. In the time of Shakespeare this would be an extremely unusual attitude, especially for a woman. Both demonstrate similar attitudes towards each other throughout the play, which fluctuates between love or hate. They are also characters who speak for them selves and have an opinion about everything, especially Beatrice In the first scene, Beatrice talks to a messenger and her uncle. Shakespeare makes it instantly seems as if she and Benedick do not to get along, when she calls him "Signor Mountanto", which is very rude and suggests that he has a 'big-head'. Even though she refers to Benedick in a negative manner, it is interesting that she mentions him before she mentions anyone else. Shakespeare portrays this interest in a fairly covert way; yet she obviously cares about him a way, by asking if he has returned from war. Yet, she does so in such a way as not to arouse suspicion about her inner feelings, by calling him a name. In the first scene, before Benedick, Claudio, Don Pedro, Balthasar and Don John enter, Beatrice mentions Benedick very many times, in total twenty-seven times, showing that she really does think about him and is curious to know how he is. Other characters around her do not notice this, as they are so used to her speaking of Benedick sarcastically and just accept that there is no hope for Beatrice and Benedick to get along and that they are better apart from each other. ...read more.

It probably has something to do with the fact that she doesn't have a father and therefore has had her chance to grow up in her own way without anyone stopping her and giving her no rules, for Shakespeare's society was male dominated. After that, Leonato and Antonio seem to give up on her as Leonato says, "well, niece, I hope to see you one day fitted with a husband." To which Beatrice replies, "Not till God make men of some other metal than dust." When calling them "dust", she is referring to them being made out of the earth and says that she will not be overruled by them thereby suggesting that no man will ever be worthy of her. She does not give Hero a chance to speak in this scene as when Leonato and Antonio try to talk to her Beatrice answers all her questions for her and so Hero, again, does not get to say what she feels. Beatrice seems to talk too much, considered a 'failing' by male characters. Later on during this scene, there is a masked dance. Benedick asks Beatrice to dance, knowing who she is to find out her real thoughts. Benedick thinks that Beatrice does not know who he is, but doesn't realise that she does know that it is him under the mask, and so she says some extremely hurtful things about him. He had expected Beatrice to say nice things about him, but she did the exact opposite. She calls him, "the prince's jester, a very dull fool, only his gift is devising impossible slanders:" She is also saying that he is nasty, yet she is being extremely nasty and horrible herself. We then see how Beatrice's words really did affect Benedick and he becomes extremely angry as well as being incredibly hurt. He thinks about how nasty Beatrice is being, and the thing he was most hurt about was being called a fool. ...read more.

This Is different to what would be expected of the two as they appear to be constantly arguing. These scenes show how easily even the cleverest characters of the play are tricked and deceived by there friends and family. It also shows the most modern and clever characters of the play are tricked into believing a lie. It is also extremely funny to observe the attitude changes to love of Beatrice's and Benedick's attitudes. As they were both so against it before and now they have both changed to like it. There attitudes towards each other also quickly change, and they both take a false liking into each other. In Act 4, Scene 1, Beatrice asks Benedick to prove his love to her. She asks him to kill Claudio, one of his best friends, as he has wronged Hero. This is extremely hard for Benedick and he has to show Beatrice that he cares for her, so therefore has no choice but to challenge Claudio and kill him. In the book 'The drama and love, life and death in Shakespeare' by Anthony Holden, the plays are referred to being, "about the essential respect built into true love" This is a very true comment as Elizabethan lovers would do anything for each other, especially the men for the women, to declare their love. They are willing to forgo anything for them as everything they seem to do is extremely hyperbole and not viable. To conclude, both Beatrice and Benedick are tremendously similar and are perfectly suited for each other, which at the end of the play is shown as they are matched together. They are the most modern characters of the play as they both have their own feelings and views on everything. They evidently do not care what others around them think of by showing the way they are so confident and independent. They keep the play flowing and adjoin humour and provide the audience with great entertainment, by the way they speak to each other and others around them. ?? ?? ?? ?? Priyan Shah ...read more.

The writer has explored in some detail the relationship between Beatrice and Benedick, though their interpretation is at some points lacking in depth. A rather simplistic and superficial translation of Ã¢â‚¬Å“explore the relationshipsÃ¢â‚¬Â is adopted, focusing only on whether the ...

The writer has explored in some detail the relationship between Beatrice and Benedick, though their interpretation is at some points lacking in depth. A rather simplistic and superficial translation of Ã¢â‚¬Å“explore the relationshipsÃ¢â‚¬Â is adopted, focusing only on whether the two are well-suited as a romantic couple, whereas a higher graded response might explore their complex and changing relationship in greater depth.

The writer shows a good understanding of Beatrice and BenedickÃ¢â‚¬â„¢s relationship. Some comments are fairly superficial however, and deal more with the literal meaning and connotations of the words, rather than the deeper significance they hold in revealing elements of the charactersÃ¢â‚¬â„¢ relationship. The writer has referenced the text and used quotations effectively to illustrate their points. The level of analysis could be improved by placing more focus on the development of the relationship from one of seeming mutual disdain to that of a loving couple and how Shakespeare implied the subtleties of the relationship even from the beginning of the play. The context of the play could also be discussed to greater effect.

The quality of writing is fair, mostly effectively conveying the writerÃ¢â‚¬â„¢s analysis. Some minor spelling and grammatical errors are present, while occasional inelegant sentences structures and lexical choices detract from the fluency of the piece. Some technical terms are included, though a greater range and further insight into their effect upon the readersÃ¢â‚¬â„¢ perceptions of Beatrice and BenedickÃ¢â‚¬â„¢s relationship is needed to move into the higher grades. The piece is structured suitably with an effective conclusion, though use of a Ã¢â‚¬Å“Point-Evidence-ExplainÃ¢â‚¬Â structure may have helped the individual paragraphs to more cogently and concisely express their arguments.