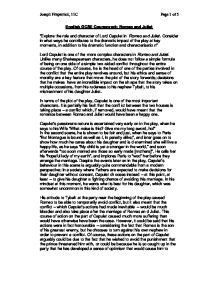 Explore the role and character of Lord Capulet in Romeo and Juliet. Consider in what ways he contributes to the dramatic impact of the play at key moments, in addition to his dramatic function and characterisation

English GCSE Coursework: Romeo and Juliet "Explore the role and character of Lord Capulet in Romeo and Juliet. Consider in what ways he contributes to the dramatic impact of the play at key moments, in addition to his dramatic function and characterisation" Lord Capulet is one of the more complex characters in Romeo and Juliet. Unlike many Shakespearean characters, he does not follow a simple formula of being on one side of a simple two-sided conflict throughout the entire course of the play. Of course, he is the head of one of the parties involved in the conflict that the entire play revolves around, but his ethics and sense of morality are a key feature that move the plot of the story forwards; decisions that he makes have an incredible impact on the shape that the story takes on multiple occasions, from his rudeness to his nephew Tybalt, to his mistreatment of his daughter Juliet. In terms of the plot of the play, Capulet is one of the most important characters. It is partially his fault that the conflict between the two houses is taking place - a conflict which, if removed, would have meant that the romance between Romeo and Juliet would have been a happy one. Capulet's passionate nature is ascertained very early on in the play, when he says to his Wife "What noise is this? Give me my long sword, ho!" In the second scene, he is shown to be fair and just, when he says to Paris "But Montague is bound as well as I, In penalty alike;", and later goes on to show how much he cares about his daughter and is determined she will live a happy ...read more.

Romeo is "a virtuous and well governed youth", which is far more complimentary than would be expected for any Capulet to say of a Montague. This may merely be just because he fears the consequences brought upon him by the Prince of Verona, which would also explain why he lost his temper with Tybalt, but it may also be genuine fairness on the part of Lord Capulet. This is a deciding factor that Shakespeare sets as a pivot in the characterisation within the play to create a combination of different emotions within the audience at the end of the play; both anger and sympathy for Capulet, as it remains questionable whether his actions were selfish or selfless. The third key event that shows the audience a great deal of Capulet's complex personality is that of his behaviour to Juliet when she is told about the plans for her to be married to Paris. Yet again, there are an unlimited number of different possible reasons why Capulet decided that she would be married, and again, why he lost his temper to such a high degree when she went against his commands. Up to this point in the play there was a large amount of evidence suggesting that Caplet loves his daughter greatly, and yet at this point he threatens to disown her, and calls her a "disobedient wretch". As his daughter, Juliet should have known her Father well, and yet she seems surprised at his anger, defending her disagreement carefully and creatively, by saying "not proud you have, but thankful that you have. Proud can I never be of what I hate, But thankful even for hate, that is meant love" - This shows that Capulet ...read more.

These different feelings can completely change the play in the eyes of the audience, as different levels of sympathy for different characters can create completely different kinds of tragedies. It is very easy for one to pass Capulet off as a bad father with an aggressive and tyrannical personality, but there is also substantial evidence throughout the play that Lord Capulet's motives may not be as they first appear. It could easily be said that he merely wanted what was best for his daughter, and has a personality defect in which he is easily angered when disobeyed. He may not have meant it when he spoke to his daughter in such an aggressive way. His characterisation as a rash and impulsive Italian Catholic male may have been "political correctness" on the part of Shakespeare, to appeal to a protestant Elizabethan prejudice. He treats his Wife and the Nurse with considerably small amounts of respect, telling the Nurse to "Utter [her] gravity o'er a gossip's bowl". Finally, at the end of the play he is extremely upset about the events that have passed, and full of remorse for the damage caused by his actions. The emotions he shows during the "ending" phase of the play not only add to the overall tragedy, but also have the effect of concluding the play, and giving the audience to make final decisions about their opinions on who is to blame for the events that have occurred. All of Capulet's personality aspects contribute to his character, and to the play as a whole: The play would be different entirely without the involvement of this complex Character. ?? ?? ?? ?? Joseph Fitzpatrick, 11C Page 1 of 5 ...read more.