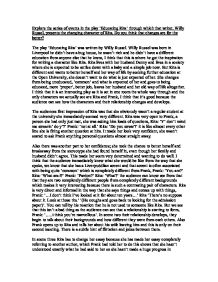 Explore the series of events in the play 'Educating Rita' through which that writer, Willy Russel, presents the changing character of Rita. Do you think that changes are for the better?

Explore the series of events in the play 'Educating Rita' through which that writer, Willy Russel, presents the changing character of Rita. Do you think that changes are for the better? The play 'Educating Rita' was written by Willy Russel. Willy Russel was born in Liverpool he didn't have a bug house, he wasn't rich and he didn't have a different education from anyone else that he knew, I think that this is where he got the inspiration for writing a character like Rita. Rita lives with her husband Denny and lives in a society where she is expected to be settles down with a baby and a simple job now. But Rita is different and wants to better herself and her way of life by seeking further education at the Open University, she doesn't want to do what is just expected of her. She changes from being uneducated, 'common' and what is expected of her and goes to being educated, more 'proper', better job, leaves her husband and her old way of life altogether. I think that it is an interesting play as it is set in one room the whole way through and the only characters we actually see are Rita and Frank, I think that it's good because the audience can see how the characters and their relationship changes and develops. The audiences first impression of Rita was that she obviously wasn't a regular student at the university she immediately seemed very different. ...read more.

In scene 7 Rita is invited to go to Frank's house for dinner but in the end she doesn't actually go. She was scared that she wouldn't fit in with the rest of the people that were there, she didn't want make an idiot out of herself, she felt like she wouldn't be able to hold a good enough conversation with the people there as they may not be like her and from her background. She felt like and idiot as she felt as though she wasn't wearing the right dress '...tried on five different dresses. The all looked bleedin' awful' and that she didn't bring the right wine 'Well you wouldn't take sweet sparkling wine, would y'?' The audience could see that she felt really insecure and embarrassed and she didn't want to look like a joke, also she didn't have the support of Denny either. She felt as if Frank had just invited her for a laugh '...but brig her in because she's good for a laugh.' Just because she was funny and had a sense of humour but she didn't want that 'I didn't want to your house just to play the court jester.' She also confides in Frank that she wasn't comfortable when she went home, she went to the pub and felt like she didn't belong there either I think that the audience can see that she is halfway through her transformation now. Scene 8 was a very important turning point for Rita 'It's me case' she has packed a case and is off to stay with her mother, she has left Denny. ...read more.

In Act 2 Scene 5 Frank says 'From now on I shall insist on being known as Mary, Mary Shelley' he is mocking Rita as she has decided to change her name back Susan the audience can tell that Frank doesn't like this he is trying to make the point to her that it doesn't matter what she calls herself she is still the same, deep down she is still Rita no matter how much she tries to change that. He says 'You've found a different song....hollow and tuneless' he admits to her that she has changed but not for the better and that he doesn't like the new Susan or Rita that she has seem to become, he's trying to tell her that she is trying to be something that she's not. When Rita says, 'I'll make a decision. I'll choose.' The audience can see that this is the Rita that she wants to be, she has done what she wanted finally, she got her self an education, stood up to her family and Denny. I think that the audience could find the ending a bit boring as it isn't a clear cut ending as Rita doesn't say what she is going to do next neither does Frank so the audience don't know what is going to happen, but I think that this is also quite good as it isn't your usually happy ever after ending, I think that the audience could find it very realistic and also it wasn't a play with a huge set it was just set in one room between two characters. ...read more.