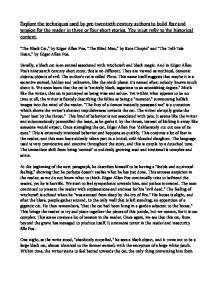 Explore the techniques used by pre-twentieth century authors to build fear and tension for the reader in three or four short stories. You must refer to the historical context.

Explore the techniques used by pre-twentieth century authors to build fear and tension for the reader in three or four short stories. You must refer to the historical context. "The Black Cat," by Edgar Allan Poe, "The Blind Man," by Kate Chopin" and "The Tell-Tale Heart," by Edgar Allan Poe. Usually, a black cat is an animal associated with witchcraft and black magic. And in Edgar Allan Poe's nineteenth century short story, this is no different. They are viewed as mythical, demonic objects; objects of evil. The author's cat is called Pluto. This name itself suggests that maybe it is a secretive animal, hidden and unknown, like the ninth planet it's named after; nobody knows much about it. We soon learn that the cat is "entirely black, sagacious to an astonishing degree." Much like the writer, this cat is portrayed as being wise and astute. Yet within what appears to be no time at all, the writer is fiercely describing the feline as being a "monster," summoning hellish images into the mind of the reader. "The fury of a demon instantly possessed me" is a quotation which shows the writer's abstract impulsiveness towards the cat. The writer abruptly grabs the "poor beat by the throat." This kind of behavior is not associated with pets. It seems like the writer and subconsciously personified the beast, as he grabs it by the throat, instead of kicking it away like someone would expect. ...read more.

When we find out the man is blind, the reader feels a sense of understanding, and empathizes with the old man, even though "he was not old." The writer personifies the man's feelings. "Hunger, with sharp fangs was gnawing at his stomach." This seems unusual and eerie; the setting does not produce an image of fear, yet this powerful phrase 'wakes up' the reader and creates a tension and slight hope that something will happen. When the group of boys try and take his box away from him, he acts like anyone would. He shouts at them, and tries to get it back. The reader thinks, that when a policeman came round the corner, he would get his box back and the boys would get in trouble. However, upon "seeing that he was the centre of a disturbance, jerked him violently" and took him aside. This scared the reader as it is totally unexpected, and is preparing us for another unexpected event, yet to come. "Then, something happened." Before we even learn the details, suspense has already been built, as the reader is told than something has happened. It doesn't matter at this stage what it is - all that matters is that we are on the edge of our seat, waiting. Emotions run wild as we learn that whatever has happened made "the strongest men who saw it grow sick and dizzy." ...read more.

'dissemble no more! I admit the deed!" This quickfire of shouted remarks is out of desperation and guilt. The final line of the story is, "it is the beating of his hideous heart! This refers to the old, dead man. But this is also extremely ironic, and the sound that was ringing in Poe's ears was out of guilt, and subconsciously it was his own heart. It is human nature to have fears. Lots of people have claustrophobia, and many more would hate to be buried alive. In " The Tell-Tale Heart" and "The Black Cat," there are incarcerations and live burials. This is extremely disturbing and people in the nineteenth century would be extremely disturbed to see or hear of such events. The shock horror at the end of all three stories is graphic: the imagery produced is sensitive and detailed. Edgar Allan Poe and Kate Chopin use many different techniques and methods to build up tension and suspense. Use of effective, redolent language, and the reader's imagination combine to force painful settings and events into the story. Nineteenth century society was brutal - there were gruesome executions and murders, and suspicious activity and witchcraft were looked down upon and punished. Conflict between logic and instinct in characters puts strain and pressure on the reader. Confusion and unexpected twists in the complex plots produce fear and total anxiety in the reader. ...read more.