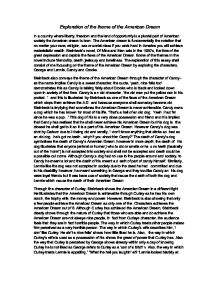 Explore the theme of the American dream in &quot;of mice and men&quot;.

However Candy's dog was shot by Carlson due to it being old and smelly, 'I don't know anything that stinks so bad as an old dog...he's got no teeth...why'n't you shoot him Candy?' The death of Candy's dog symbolises the death of Candy's Amercian Dream, however in more depth, the death of his dog illustrates that anyone (animal or human) who is old or smells or has no teeth (basically out of the 'norm') is not accepted into society and shall not be accepted and death could be a possible out come. Although Candy;s dog had no use to the people around and society, to Candy he meant a lot and the death of his meant a death of part of candy himself. Similarly, Lennie like the dog was not accepted in society due to the deed he had committed and due to his disability however, he meant something to George and they too like Candy an his dog ...read more.

The way in which Curley's wife describes him, 'I don' like Curley. He ain't a nice fella' shows how little liked he is. Also, the way in which Curley's wife is used as a possession of his shows the greed of power that Curley has. Also the way that Curley is perceived by George shows already within only a day of knowing Curley he is not liked as George refers to Curley as a 'son of a b***h' vAlso, the way in which Curley treats Lennie is appalling,' "What the h**l you laughin' at? 'Lennie looked blankly at him. "Huh?" Then Curley's rage exploded. "Come on, ya big b*****d. Get up on your feet. No big son-of-a-b***h is gonna laugh at me. I'll show ya who's yella.' This shows the arrogance of Curley. The theme of the American Dream is finely woven through the entire novel and without a doubt this has been done very effectively . Steinbeck clearly conveys his message about the American Dream in much detail and has done in a very meaning full way. ...read more.