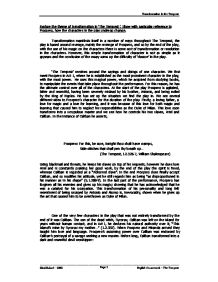 Explore the theme of transformation in 'The Tempest '. Show with particular reference to Prospero, how the characters in the play undergo change.

Explore the theme of transformation in 'The Tempest '. Show with particular reference to Prospero, how the characters in the play undergo change. Transformation manifests itself in a number of ways throughout The Tempest, the play is based around revenge, mainly the revenge of Prospero, and so by the end of the play, with the use of his magic on the characters there is some sort of transformation or resolution in the characters. However, this simple transformation of character is not as simple as it appears and the conclusion of the essay sums up the difficulty of 'closure' in the play. 'The Tempest' revolves around the sayings and doings of one character. We first meet Prospero in Act 1, where he is established as the most prominent character in the play, with the most power. He uses this magical power, which he acquired from studying books, to manipulate the events that take place throughout the performance. For this reason, he has the ultimate control over all of the characters. At the start of the play Prospero is agitated, bitter and resentful, having been severely mislead by his brother, Antonio, and being exiled by the King of Naples. He has set up the situation we find the play in. We see several different sides to Prospero's character for the duration of the play. Firstly, a loving father, a love for magic and a love for learning, and it was because of this love for both magic and learning that caused him to neglect his responsibilities as the Duke of Milan. ...read more.

(3.1.54-56) In this example she pledges her virginity to Ferdinand, this is unexpected from her as she is so isolated from society, yet she understands the attitudes of the people that she has never been around. Ferdinand is warned by Prospero not to "break her virgin-knot" before the wedding or they will experience misfortunes beyond both of their control and they "shall hate it both". Ferdinand heeds this warning and the sanctimonious marriage takes place. Their marriage is a transformation organised by Prospero before Ferdinand's arrival on the island, it was a political move to secure Prospero's place as the Duke of Milan and ensure Miranda's future by making her Queen. However, Prospero never mentions the power that he and his daughter are regaining because of this "rich gift", or the true price or purchase of his daughter's hand, and the fact that the marriage is not consummated before the ceremony is equally important to him because it is his prime bargaining chip and will secure both of their positions in Italy. Ferdinand and Miranda's love is the same sort of instant physical attraction that Romeo and Juliet had, although Romeo and Juliet's love wasn't influence by a mischievous spirit like Ariel and a powerful father like Prospero. King Alonso of Naples begins his entrance as a man who wants control, "Where's the master? Play the men." (I.I.8-9). However, once he arrives on the island, with his companions, and he comes to a realisation that his son is dead, he becomes a withdrawn character who says little and wants to hear even less. ...read more.