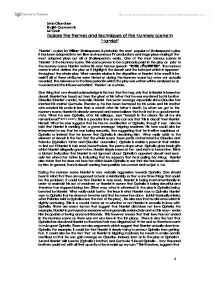 Explore the themes and techniques of the Nunnery scene in Hamlet

Explore the themes and techniques of the Nunnery scene in 'Hamlet' 'Hamlet', a play by William Shakespeare, is probably the most popular of Shakespeare's play. It has been adapted into ten films and numerous TV productions and stage plays making it the most adapted plays out all of Shakespeare's works. One of the most famous scenes in 'Hamlet' is the Nunnery scene. This scene proves to be a pinnacle point in the play as prior to the nunnery scene Hamlet recites his most famous speech "To be or not to be". The nunnery scene is what defines the play as it highlights the deceit and the betrayal which is apparent throughout the whole play. What remains elusive is the disposition of Hamlet. Is he mad? Is he s****t? All of these attributes were hinted at during the Nunnery scene but were not actually revealed. The relevance to the time period in which the play was written will be analysed so as to understand the influences behind 'Hamlet' as a whole. One thing that one should acknowledge is the fact that the tragedy that is Hamlet is based on deceit. Hamlet has found out from the ghost of his father that he was murdered by his brother Claudius (Hamlet's uncle). Naturally, Hamlet has sworn revenge, especially since Claudius has married his mother Gertrude. Therefore, he has been betrayed by his uncle and his mother who married his uncle in less than a month after his father's death. ...read more.

Indeed when Hamlet leaves, Ophelia says her only soliloquy in which she states her belief that Hamlet is truly mad. Claudius, however, is less convinced and believes that Hamlet suspects something regarding Claudius's crime. What one may conclude is that Claudius' suspicions are correct as throughout most of the play after the nunnery, Hamlet seems to be relatively sane. Misogyny is the hatred of women. Therefore, if one truly believes Hamlet hates women, one must consider one thing; when did Hamlet start to hate women? Probably the most obvious is that he started hating women after his mother's marriage to Claudius. Hamlet believes that this relationship is nothing short of incestuous and resents his mother for this. So when he sees Ophelia, he starts out by being what some may believe to be ironic or even sarcastic when he first addresses Ophelia ("Nymph, in thy orisons..."). His tone of sarcasm is inflamed when Ophelia addresses Hamlet too formally. Hamlet begins his onslaught by asking Ophelia if she is honest and if she is fair. This is Hamlet basically asking Ophelia if she is chaste as well as beautiful. This is ironic as it has been said that chastity and beauty are incompatible. Indeed Hamlet seems to state that himself which prompts Ophelia to possibly try to move the focus from herself with abstract personification ("could Beauty... with Honesty"). His onslaught reaches new heights when he tells Ophelia to get herself to a nunnery. A 'nunnery' is actually a convent but is also Elizabethan slang for a brothel. ...read more.

Therefore, it could be suggested that he is trying to make Ophelia withdraw from the rest of the world in order to protect her virtue. After the "To be or not to be" soliloquy, Hamlet is in a melancholy mood. But why? There are plenty of possible reasons such as the fact that his father has been murdered and the very person who murdered his father is now married to his mother. This may have lead to him becoming suicidal and as a result he is at a low point. Therefore, metaphorically speaking, a Molotov cocktail has been made and the nunnery scene in which Ophelia seemingly betrays Hamlet is the perfect flame which blows up Hamlets remaining strand of reason whether or not he is feigning madness. This, however, leads to clashing responses from the audience. People believe that Hamlet is mad but some believe that he was not mad but has had his sanity wiped out as a result of the nunnery scene thus commencing his derogatory rant. I think that it is impossible to label the nunnery scene under one theme. I believe that the nunnery scene is based on a cocktail of themes which make the scene like a pinnacle moment in the play. In some cases you can say that misogyny is the most prevalent theme. The end of love has also been touched upon and so it can be said that there are different opinions on what Shakespeare has purposely used the issues from the previous scenes as a way to build up the nunnery scene's sense of explosion, trauma, resentment and treachery. ?? ?? ?? ?? Sean Okundaye English Coursework Mr Cook 3 ...read more.