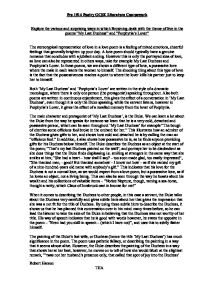 Explore the various and surprising ways in which Browning deals with the theme of love in the poems &quot;My Last Duchess&quot; and &quot;Porphyria's Lover&quot;

Pre 1914 Poetry GCSE Literature Coursework Explore the various and surprising ways in which Browning deals with the theme of live in the poems "My Last Duchess" and "Porphyria's Lover" The stereotypical representation of love in a love poem is a feeling of mixed emotions, cheerful feelings that generally brighten up your day. A love poem should typically have a genuine romance that concludes with a jubilant ending. However this is only the portrayed idea of love, as love can also be represented in others ways, take for example My Last Duchess and Porphyria's Lover. In these poems, we are shown a different type of love, a possessive love where the male in each wants the woman to himself. The shocking thing about this type of love is the fact that the possessiveness reaches a point to where the lover kills his partner just to keep her to himself. Both 'My Last Duchess' and 'Porphyria's Lover' are written in the style of a dramatic monologue, where there is only one person (the protagonist) speaking throughout. Also both poems are written in continuous enjambment, this gives the effect of a conversation in 'My Last Duchess', even though it is only the Duke speaking, while the servant listens, however in Porphyria's Lover, it gives the effect of a recalled memory from the lover of Porphyria. The main character and protagonist of 'My Last Duchess', is the Duke. ...read more.

This is a surprising way to deal with the theme of love within a poem, as 'My Last Duchess' strays away from the typical representation of love we expect to see in a love poem and replaces it with a possessive love. The Duchess was almost like an accessory to the Duke, more of an object then a living being. 'Porphyria's Lover' also has a possessive lover, whom is similar in many ways to the Duke in 'My Last Duchess'. The main connection between Porphyria's Lover and the Duke is their possessiveness and control over women. However, the difference between the two is that the Duke wants his partner to behave how he wants her to, a more controlling love, whereas the lover of Porphyria wants to keep a moment perfectly preserved and shows a less controlling love, but rather a caring love. Our expectations at the start of 'Porphyria's Lover' are ones of a happy relationship, with signs that Porphyria may be doing something that she should not i.e. cheating on a husband. The line "I listened with heart fit to break" shows that this is an arranged meeting between Porphyria and her lover, which hints at the idea of a forbidden relationship. However, with that said it sets the scene as being bad weather conditions, "The rain ser early in to-night", "the sullen wind was soon awake...and did its worst to vex the lake", which more often then not leads to tragedy in most cases. ...read more.

Although she has a husband already, she displays her love to her lover as if he was her only love, however he does not return her affection in the way we would expect him to, instead he just admires "she sat down by my side and called me. When no voice replied, she put my arm about her waist." He shows his affection in his own way by preserving the moment forever, "in one long yellow string I wound three times her little throat around, and strangled her" a poetic death. My expectation of love poetry is that it creates a joyous feeling, one that I can relate to, and has a happy tone, with a happy conclusion. However, 'My Last Duchess' and 'Porphyria's Lover' do not meet these clich� examples of what love is within a love poem. Instead, they display a much more surprising variation of love, one that presents the aspect of loving an object, or possessive love, rather than the love of another. Another presentation of a contrasting love is represented within 'Porphyria's Lover'. The idea of killing the person you love, goes against the expectations of love, however killing your love just to preserve that special moment forever, is a surprising, and very controversial way of presenting love within a love poem. However, it is this controversial love is what made Browning's poems so appealing to his readers in Victorian times. The idea of a forbidden and possessive love strays away from the expected path of a love poem, something that was very engaging to the audience of Browning's time. ?? ?? ?? ?? Robert Hanson THA ...read more.