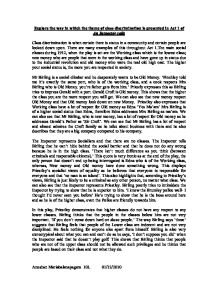 Explore the way in which the theme of class discrimination is presented in Act 1 of An Inspector calls Class discrimination is when certain there is status in a community and certain people are looked down upon. There are many examples of this throughout Act 1.The main social classes during 1912, when the play is set are the Working class which is the lowest class; new money who are people that were in the working class and have gone up in status due to the industrial revolution and old money who were the real old high cast. The higher your social status is, the more you are respected in society. Mr Birling is a social climber and he desperately wants to be Old Money. 'Finchley told me it's exactly the same port, who is of the working class, and a cook respects Mrs Birling who is Old Money. you're father gets from him.' Priestly expresses this as Birling tries to impress Gerald with a port. ...read more.

This quote is very ironic as at the end of the play, the only person that doesn't end up being interrogated is Edna who is of the Working class, whereas, New money and Old money have done something wrong. This displays Priestley's socialist views of equality as he believes that everyone is responsible for everyone and that 'no man is an island'. This also highlights that, according to Priestley's views, Birling is just likely to be a criminal as any other person, no matter what class. We can also see that the inspector represents Priestley. Birling poorly tries to intimidate the Inspector by trying to show that he is superior to him. 'I know the Brumley police well- I thought I'd never seen you before' He's trying to show that he is the boss around here and as he is of the higher class, even the Police are friendly towards him. In this play, Priestley demonstrates that higher classes do not have any respect to any lower classes. ...read more.

'Very awkward', this shows that the Inspector believes it would be only awkward for Birling if he had to help others. It also shows that the Inspector believes that helping other people is what should be happening. In conclusion, it is evident that the Priestly has been able to portray this theme of Class discrimination by using a variety of methods. Firstly Birling constantly attempts to make him self popular and majestic by associating himself with the higher class. Class discrimination is also depicted in Act 1, as we see Edna calling addressing Mrs Birling in a formal tone. Also we see that Birling has great respect for Old money as he is very proud to have a son-in-law if a high social status. Therefore, we can see that class discrimination has been shown because the conversations between Birling and the Inspector, outline the fact that there is a deep contrast in what they believe in and that Birling feels that the upper class are allowed to despise the lower class, whereas the Inspector believes that there should be no class system at all. 967 Words ?? ?? ?? ?? Anoshan Mariabalanayagam 10L 01/12/2010 ...read more.