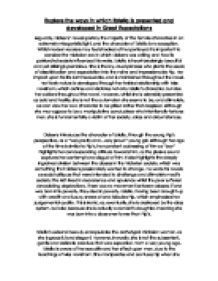 Explore the ways in which Estella is presented and developed in Great Expectations Arguably, Dickens' novels portray the majority of the female characters in an extremely misogynistic light, and the character of Estella is no exception. Whilst modern readers may feel shocked at her portrayal, it is important to consider the Victorian era in which Dickens was writing and how its patriarchal society influenced his works. Estella is heart-breakingly beautiful and yet strikingly pernicious. She is the icy, cruel princess who plants the seeds of dissatisfaction and expectation into the na�ve and impressionable Pip. Her impact upon his life is immeasurable, and is maintained throughout the novel. Her frosty nature is developed through her twisted relationship with Miss Havisham, which defines and dictates not only Estella's character, but also her actions throughout the novel. However, whilst she is ostensibly presented as cold and hostile, she is not the automaton she seems to be, and ultimately, we can view her as a character to be pitied rather that despised. Although she may appear to be a manipulative conductress who intentionally tortures men, she is fundamentally a victim of her society, class and circumstances. Dickens introduces the character of Estella, through the young Pip's perspective, as a "very pretty and...very proud" young girl. Although her age at the time is similar to Pip's, her constant addressing of him as "boy" highlights her condescending attitude towards him, as the plosive sound captures her contempt and disgust of him. ...read more.

Estella, meaning star or love, is a prime example of this. Her name is ambiguous as it denotes several things. She is the "theme that so long filled [Pip's] heart": his thoughts and actions are constantly orbiting around her as if she is his life source, as if she is his star. However, stars do not simply illuminate beauty, but are inwardly destructive forces of energy that are raging and chaotic. Externally, Estella is pulchritudinous but inwardly she is catastrophically destructive, like a star. There is bitter irony in the sense that her name connotes love, yet she is unable to feel love or any other emotion. Estella's inability to love must be acknowledged not to be solely her own fault, as her natural development, from a very young age, was cruelly stifled by Miss Havisham. Her constant instructions to "break their hearts" and the fact that they are whispered into Estella's ears shows the persistent and pernicious guidance that she receives. She lives with these teachings her entire life and is victimised by Miss Havisham. Although readers are often infuriated by Estella's callous actions, we understand, but not necessarily forgive, her behaviour. The image of Miss Havisham embracing Estella "with lavish fondness" is tender and motherly, which undercuts the words that she constantly whispers, like a snake, into Estella's ears. This eventually destroys Estella creating a monster that is unable to love. ...read more.

The plosive sounds of her words reinforce her bitter feelings towards her late husband but also highlight her emphatic tone: she genuinely believes she has changed for the better. The presentation of Estella's character as a woman who takes pleasure in inflicting pain is shocking to contemporary readers. When she was a child she was crafted and controlled by Miss Havisham, but she maintains her cruel nature which infuriates readers. However, we come to empathise with her as we see that she is a victim of Miss Havisham, and genuinely does not know what it is to love. As difficult as heartache and emotions can be, we pity her for not being able to feel them. Dickens realistically explores what happens when society takes a child and oppresses all her natural instincts of self-discovery and awareness, and the result is the memorable creation of Estella. Although her presentation is shocking, her development from a precocious child to a cold, stoic woman is not surprising. Not only is it foreshadowed through Pip's narration, but we can also foresee it in her childhood nature. Nonetheless, Dickens does not present her development as finite, rather she is a work in progress and we witness what, for Estella, is a remarkable change. Thus, we are left with the tentative hope that she will develop some semblance of emotion. Though it may be slow, it will be hard fought for and ultimately won. ...read more.