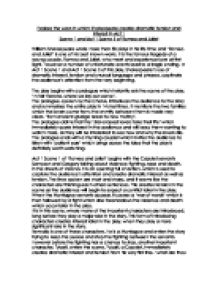 Explore the ways in which Shakespeare creates dramatic tension and interest in Act 1 Scene 1 and Act 1 Scene 5 of Romeo and Juliet William Shakespeare wrote more than 30 plays in his life time and 'Romeo and Juliet' is one of his best known works. It is the famous tragedy of a young couple, Romeo and Juliet, who meet and experience love at first sight. However a number of unfortunate events lead to a tragic ending. In Act 1 Scene 1 and Act 1 Scene 5 of this play, Shakespeare's use of dramatic interest, tension and unusual language and phrases, captivate the audience's attention from the very beginning. The play begins with a prologue which instantly sets the scene of the play, 'In fair Verona, where we lay our scene'. The prologue, spoken by the Chorus, introduces the audience to the story and summarises the entire play in 14 short lines. It mentions the two families which the lovers come from; the enmity between them is made very clear- 'from ancient grudge break to new mutiny'. The prologue claims that the 'star-crossed lovers take their life' which immediately sparks interest in the audience and will keep them wanting to watch more, as they will be interested to see how and why the lovers die. ...read more.

Prince Escalus stops the fighting and also creates a lot of dramatic tension in his short appearance on stage. He declares that any further fighting between the families would result in death of those involved. As the scene progresses the tension builds more and more. This seems to be linked to the hierarchy of the characters in the play, because as the class of the characters increase on stage, the tension brought by their actions, also increases. After the Prince and Capulets exit the stage the dialog turns to the subject of Romeo. Lady Montague first mentions Romeo and this immediately creates dramatic interest as the audience would finally be introduced to one of the main characters of the play. Lady Montague is initially worried about Romeo, but is also relieved that he was kept out of the fighting and she asks Benvolio if he has seen his cousin: 'O where is Romeo? Saw you him today? Right glad I am he was not at this fray.' This concern is rather ironic as, although Romeo was not involved in this fight, he is later involved in a much larger fight which results in death and banishment. ...read more.

This is because in the time the play was set, it would be against religion for two young strangers to meet and share a kiss, which is what Romeo and Juliet. This also foreshadows the wedding ceremony, officiated by Friar Lawrence in Act 2 Scene 6. Is it not until the end of Act 1 Scene 5, when Juliet is alone with her nurse, that she realises Romeo is a Montague. 'My only love sprung from my only hate!' (L. 135) The fact that Juliet claims that she has fallen in love with Romeo so soon after meeting him, adds dramatic tension to the scene, and she cries out- 'If he be married, my grave is like to be my wedding-bed.' (Act 1 Scene 5 L. 131) which foreshadows the later tragedy in Act 5 Scene 3. Act 1 Scene 1 and Act 1 Scene 5 both include dramatic interest and tension, and Shakespeare has used this to keep the audience entertained. These two scenes introduce the audience to a number of different characters and contain some of the key points of the story. Shakespeare's effective way of using language and devices to create tension and interest keeps the audience captivated through out the entire play. ...read more.