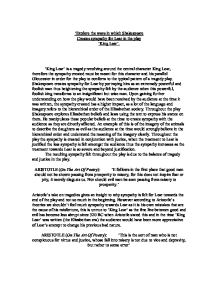 'Explore the ways in which Shakespeare Creates sympathy for Lear in the play 'King Lear'.

'Explore the ways in which Shakespeare Creates sympathy for Lear in the play 'King Lear'. 'King Lear' is a tragedy revolving around the central character King Lear, therefore the sympathy created must be meant for this character and his parallel Gloucester in order for the play to conform to the typical pattern of a tragedy play. Shakespeare creates sympathy for Lear by portraying him as an extremely powerful and foolish man thus heightening the sympathy felt by the audience when this powerful, foolish king transforms to an insignificant but wise man. Upon gaining further understanding on how the play would have been received by the audience at the time it was written, the sympathy created has a higher impact, as a lot of the language and imagery refers to the hierarchical order of the Elizabethan society. Throughout the play Shakespeare explores Elizabethan beliefs and laws using the text to express his stance on them. He manipulates these popular beliefs at the time to create sympathy with the audience as they are directly affected. An example of this is of the imagery of the animals to describe the daughters as evil as the audience at the time would strongly believe in the hierarchical order and understand the meaning of the imagery clearly. Throughout the play the sympathy is created in conjunction with justice, when the treatment to Lear is justified the less sympathy is felt amongst the audience thus the sympathy increases as the treatment towards Lear is so severe and beyond justification. ...read more.

The pretence of madness by Edgar as a disguise and a way to get close to Lear to help him see sense and Lear's own madness derived from his fixation with his daughter's behaviour and his own misjudgement. In all three cases the use of madness by Shakespeare are fairly ironic as madness actually creates sanity and clarity. LEAR: 'Didst thou give all to thy two daughters? And art Thou come to this?' Lear's character has emotionally developed somewhat from the beginning s he has now pinpointed that his troubles started once he had given everything to his daughters but he still doesn't hold himself responsible for this and blames his daughters or similar characters for all the tragedy in the world and that everyone's downfall is due to the same circumstances of his own. He is still self-obsessed and hasn't learnt to emphasise with others problems. In Act 1 Lear is introduced as a momentous king but with a clear lack of objective judgement and an extremely obstinate personality. Even before Lear enters the stage aspects of his traits are revealed through the conversation between Kent and Gloucester. KENT: 'I thought the King had more affected the Duke of Albany than Cornwall.' Telling the audience of Lear's tendency to favouritism, a poor quality in a King. ...read more.

Thou art a lady;' Stating their manipulating attitude of his daughters towards men (their hierarchical order betters). And ironically calls his daughter a lady, Lear recognises his daughters deceitful nature and the way in which they're presentation; their clothes and insincere manner manipulate others. The clothes worn by the daughters, comes under much scrutiny during this speech relating to their greedy nature that they want more than they need; LEAR: 'Why, nature needs not what thou gorgeous wear'st, Which scarcely keeps thee warm. But for true need- You heavens, give me that patience, patience I need!' LEAR: I will have such revenges on you both That all the world shall - I will do such things - What they are yet I know not, but they shall be They shall be the terrors of the earth! You think I'll weep, No, I'll not weep. Storm and tempest. I have full cause of weeping, but this heart Shall break into a hundred thousand flaws Or e'er I'll weep. O fool I shall go mad.' The begging tone alone with the repetition of the words patience and need and the use of an exclamation mark show Lear's increasing frustration and anger as the daughters drive him to destruction. Lear's request to the gods for patience shows his true desperation for patience as it was something he didn't need or value before his daughters deceit. ...read more.