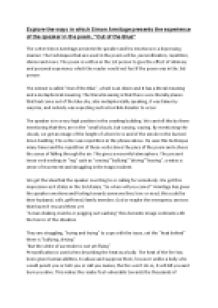 Explore the ways in which Simon Armitage presents the experience of the speaker in the poem, &quot;Out, of the Blue&quot;

﻿Explore the ways in which Simon Armitage presents the experience of the speaker in the poem, "Out of the Blue" The writer Simon Armitage presents the speaker and his emotions in a depressing manner. The techniques that are used in the poem will be, personification, repetition, idioms and more. The poem is written in the 1st person to give the effect of intimacy and personal experience which the reader would not feel if the poem was in the 3rd person. The extract is called "Out of the Blue", which is an idiom and it has a literal meaning and a metaphorical meaning. The literal meaning is that there were literally planes that had come out of the blue sky, also metaphorically speaking, it was taken by surprise, and nobody was expecting such a horrible disaster to occur. ...read more.

We get this impression as it states in the 3rd stanza, "So when will you come?" Armitage has given the speaker emotions and feeling towards someone they love or need, this could be their husband, wife, girlfriend, family member, God or maybe the emergency services that haven't rescued them yet. "A man shaking crumbs or pegging out washing" this domestic image contrasts with the horror of the situation. They are struggling, "trying and trying" to cope with the issue, yet the "heat behind" them is "bullying, driving" "But the white of surrender is not yet flying" Personification is used when describing the heat as a bully. The heat of the fire has been given human abilities, to abuse and suppress them, however unlike a bully who would punch you or kick you or call you names, the fire won't do so, it will kill you and burn you alive. ...read more.

Like any man or women would gasp and struggle to breathe in these conditions likewise, so would a fish would struggle to breathe out of the water. In the final stanza, the speaker feels that he is on his last stance and his life is coming to an end, he is now "tiring, tiring" the poet repeats the word, 'tiring' not only to convey the fact that the narrator is beginning to lose energy, but also to show the narrowing of the characters perspective as he gives in. This is also mirrored in the shorter line length of the final verse, last line of the poem. The extract ends with the suspense of the narrator "failing, flagging". Flagging has 3 meanings. It could mean trying to get attention, connects to 'white of surrender' - giving in- losing all hope, and also could mean that he is getting more tired. ...read more.