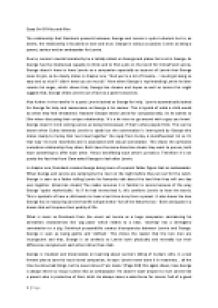 Explore the ways Steinbeck presents relationship between the characters in &quot;Of mice and men&quot;.

﻿Essay On Of Mice and Men The relationship that Steinbeck presents between George and Lennie is quite turbulent but to an extent, the relationship is founded on love and trust. George in various occasions is seen as being a parent, saviour and an ambassador for Lennie. Due to, Lennie?s mental immaturity he is totally reliant on George and places his trust in George. As George has the intellectual capacity to think and to find a job on the ranch for himself and Lennie, George doesn?t have to have Lennie as a companion especially as account of Lennie that George loses his job, as he clearly states in chapter one, ?God you?re a lot of trouble... I could get along so easy and so nice if I didn?t have you on my tail.? Here when George is reprimanding Lennie he later resents his anger, which shows that, George has dreams and hopes as well as Lennie this might suggest that, George chides Lennie out of love as a parent would do. Also further in the novella ?in a panic Lennie looked at George for help.? Lennie automatically looked for George for help and reassurance as George is his saviour. This is typical of what a child would do when they feel threatened. However George needs Lennie for companionship. As he admits to Slim when discussing their unique relationship. ...read more.

all the time he done bad things, but he never done of ?em mean.? (Page 132) this again shows, how George is always there to rescue Lennie like an ambassador. He doesn?t want anyone to hurt Lennie like a parent who is protective of their child. He always raises a wide fence for Lennie ?h**l of a good worker. Strong as a bull.? Through his comments he is seen as persistently praising Lennie in order to show everyone what he is capable of even though, his intellect might not show it. Lennie died having faith in his American dream. Chapter six ?go on? how it gona be?? George killed Lennie out of mercy so that, he wouldn?t face the brutal violence from Curley. He was willing to save Lennie and be traumatising for the rest of his life. He was ?stiff? he knew, there wouldn?t be no more companion to travel with. To share the dream of a ranch and rabbits like lennie would. George?s euthanistic killing is the ultimate sacrifice in order to prevent his friend from suffering a long sentence i.e. brutal death. He is willing in place to face the torture of mental anguish of blood on his hand. The relationship between Curley and his wife is an unfruitful, unsuccessful and unstable marriage. Lacking the key elements of mutual trust respect and compassion. ...read more.

Here we can see her beyond the stereotypical vixen in red lipstic. ?She moved closer to Lennie and sat besides him.? (Page 125) Shows us the desperate attempt for love and companionship and her need for a physical proximity, with another male figure as she seeks solace with Lennie. This shows that, there is no husband ? wife bond between the couple. In chapter two, it seems most of the time Curley?s wife is simultaneously venturing to find Curley. She comes into look for him like a constant, cat and mouse chase. She asks Slim about Curley in attempt to talk to him, he replies, ?well you aint trying hard. I seen him goin in your house.? When learning of his wife?s death Curley shows no sorrow and expresses no concern or sympathy towards his wife. All he wants is to take revenge on Lennie for his earlier incident involving his mangled hand. Similarly before her death Curely?s wife expresses distaste for her husband. In chapter five Curley?s wife says explicitly to Lennie ?I don?t like Curley. He ain?t a nice fella.? This foreshadows the fact that she doesn?t get along with Curley as it ends up in a tragedy as Curley views her death as trivial in comparison the mighty thirst for revenge from Lennie on account of his mangled hand. ________________ | Page ...read more.

The analysis in this essay starts off well but then it becomes a bit rushed and the ideas aren't fully developed. The response is a general group of ideas about the text and it need more of a focus.