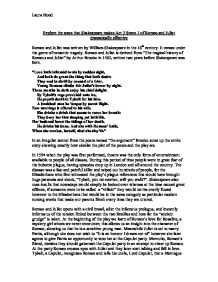 Explore the ways that Shakespeare makes Act 3 Scene 1 of Romeo and Juliet dramatically effective Romeo and Juliet was written by William Shakespeare in the 16th century. It comes under the genre of romantic tragedy. Romeo and Juliet is derived from "The tragical history of Romeus and Juliet" by Arthur Brooke in 1562, written two years before Shakespeare was born. "Love hath inflam�d twain by sudden sight, And both do grant the thing that both desire They wed in shrift by counsel of a friar. Young Romeus climbs fair Juliet's bower by night. Three months he doth enjoy his chief delight. By Tybalt's rage provok�d unto ire, He payeth death to Tybalt for his hire. A banished man he 'scapes by secret flight. New marriage is offered to his wife. She drinks a drink that seems to reave her breath: They bury her that sleeping yet hath life. Her husband hears the tidings of her death. He drinks his bane. And she with Romeus' knife, When she awakes, herself, alas! she slay'th." In an irregular sonnet from the poem named "the argument" Brooke sums up the entire story showing exactly how similar the plot of the poem and the play are. ...read more.

Mercutio confronts Tybalt who simply asks to speak "and but one word with one of us? Couple it with something; make it a word and a blow" Within the short amount of time speaking with Tybalt, Mercutio has already challenged him to a fight, this would have excited the audience as it was the first violent moment in the play. The Elizabethans knew just from the challenge that a fight was due as at the time men would be seen as effeminate if they were to decline a fight, and with Mercutio and Tybalt being so stubborn it was inevitable. Romeo enters and the two men continue to slander each other, making numerous plague references, before swords are drawn leaving Mercutio for dead. "O Romeo, Romeo brave Mercutio is dead" With this the feeling of the play alters for certain towards tragedy, Mercutio was the joker and when he dies the jokes die. The audience would also be surprised at Romeos decline of a fight. Dramatic irony occurs at the point when Romeo walks in on the confrontation between Tybalt and Mercutio. Tybalt then challenges Romeo, who he initially was seeking to fight, however Romeo responds to the surprise of his friends "And so, good Capulet- which name I tender as dearly as ...read more.

Themes of love and hate are present throughout the play and another reason that Act 3 Scene 1 proves so vital to the play is the change from love to hate in this scene. The story is of course of two teenagers from rival families who are determined to defy their families , hoping that love could defeat hate and allow them to be a couple. Up until this scene love had been triumphant with Romeo and Juliet marrying despite the "ancient feud" however although Romeo sparingly tries to keep that feeling by refusing to fight Tybalt eventually hate overpowers love. Tybalt killed Mercutio and suddenly the level-headedness of Romeo is lost as he is determined to get revenge. This supports the idea that this scene is the turning point from Romeo and Juliet being a romance towards a tragedy. In conclusion I feel this scene is very cleverly written and fulfils its purpose to the upmost quality. It hooks the audience in and leaves them hungry to find out the results of fate and demonstrates itself to be dramatically effective by plunging the unaware audience into a downward spiral of despair from the previous light heartedness of the play causing excitement and suspense. ?? ?? ?? ?? Laura Hood ...read more.