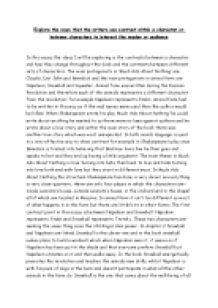 Explore the ways that the writers use contrast within a character or between characters to interest the reader or audience in &quot;Much Ado About Nothing&quot; and &quot;Animal Farm&quot;.

﻿Explore the ways that the writers use contrast within a character or between characters to interest the reader or audience In this essay the ideas I will be exploring is the contrasts between a character and how they change throughout the book and the contrasts between different sets of characters. The main protagonists in ?Much Ado About Nothing? are Cluadio, Don John and Benedick and the main protagonists in animal farm are Napoleon, Snowball and Squealer. Animal farm was written during the Russian Revolution and therefore each of the animals represents a different character from the revolution; for example Napoleon represents Stalin. Animal farm had to be written in this way as if the real names were used then the author would be killed. When Shakespeare wrote his play ?Much Ado About Nothing? he could write about anything he wanted to as there were no laws against authors and he wrote about a love story and within the main story of the book there was another love story which was most unexpected. In both novels language is used in a very effective way to show contrast for example in Shakespeare?s play once Benedick is tricked into believing that Beatrice loves him he then goes and speaks to her and they end up having a little argument. The main theme in Much Ado About Nothing is love turning into hate then back to love and hate turning into love both end with love but they start in different ways. In Much Ado About Nothing the structure Shakespeare has done is very clever as everything is very close-quarters, there are only four places in which the characters are: inside Leonato?s house, outside Leonato?s house, in the orchard and in the chapel all of which are located in Messina. In animal farm it isn?t too different as most of what happens in in the farm but there are little bits in other farms. ...read more.

sound as if they were all together and what happened, happened for the good of all the animals or to stop animals for thinking that Napoleon was doing something wrong. In the winter as Snowball was absent from the farm then there wasn?t anyone left who had much of a brain, so when the winter came there wasn?t as much food as there would usually be and this was starting to be a problem so Squealer went it to the chickens and told them that all their eggs had to be handed in so there would be food for the rest of the animals on the farm and so they would be able to survive the winter. In ?Animal Farm? language is used to represent contrast by changing the way the animal is portrayed and making the animal sound really bad when really, they are quite good. Squealer has the skill of manipulating and persuading all the animals on the farm; he manages to persuade the chickens to the hand over their eggs, to let the pigs have special privileges like an extra hour sleep and extra food and when Boxer was taken away to the slaughter house he convinced them that it was the vets new van but he didn?t have time to remove the logo of the slaughter house. If Squealer went out to address the animals and the animals didn?t like what they were hearing then they could have gotten angry and started rebelling but this was good for Napoleon as this meant he wouldn?t get hated by all the animals but they would start hating Squealer instead, not only this but Napoleon wasn?t very good and convincing the animals. In the case of the chickens, Napoleon doesn?t use force but makes it sound so essential that if the chickens disagree he would use violence to get the eggs of the chickens. ...read more.

Claudio and Hero do not have many speeches in which they speak their mind. Claudio attacks Hero by saying, "You are more intemperate in your blood than Venus or those pampered animals that rage in savage sensuality". Shakespeare creates a harsh oxymoron by contrasting "savage" and "sensuality" creating a dynamic contrast of polar opposites. The unsympathetic word "savage" with the passionate word "sensuality" startles the reader. At the same time, Claudio uses harsh diction and strong assonance to accentuate his anger. His attack is vicious and stings and, for once, Don Pedro is not speaking for him. The overall message both writers are trying to give the audience a sense of how personalities change very easily. In animal farm contrast is show between all the pigs and the other animals on the farm, the pigs are clever and literate but the other animals aren?t clever and are illiterate. We see this when the commandments are originally written they are short therefore making it simple for the animals to remember what the commandments were. They way Squealer talks to the other animals is very patronising and he is making it subtle enough so that the other animals don?t realise it. It is very obvious that by the end of the book everything had back to the same as it was before farmer Jones was kicked out his own farm. It also shows how Napoleon had little influence on what happened on the farm as the animals were still working hard and their opinions were never acknowledged. In Much Ado About Nothing there are similar ways in which contrast is presented, there is a lot of bold characters that stand out much more than the rest and there are parts where a lot of persuasive language is used. The main difference between the novel and the play is the message they try to send out. ...read more.