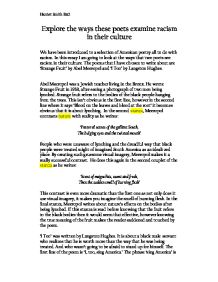 explore the ways these poets examine r****m in thei culture

Explore the ways these poets examine r****m in their culture We have been introduced to a selection of American poetry all to do with r****m. In this essay I am going to look at the ways that two poets see r****m in their culture. The poems that I have chosen to write about are 'Strange Fruit' by Abel Meeropol and 'I Too' by Langston Hughes. Abel Meeropol was a Jewish teacher living in the Bronx. He wrote Strange Fruit in 1938, after seeing a photograph of two men being lynched. Strange fruit refers to the bodies of the black people hanging from the trees. This isn't obvious in the first line, however in the second line where it says 'Blood on the leaves and blood at the root' it becomes obvious that it is about lynching. ...read more.

In the final stanza, Meeropol writes about nature's effects on the bodies after being lynched. If this stanza is read before knowing that the fruit refers to the black bodies then it would seem that effective, however knowing the true meaning of the fruit makes the reader saddened and touched by the poem. 'I Too' was written by Langston Hughes. It is about a black male servant who realizes that he is worth more than the way that he was being treated. And who wasn't going to be afraid to stand up for himself. The first line of the poem is 'I, too, sing America.' The phrase 'sing America' is a metaphor for being part of America. ...read more.

Meeropol was a Jew, and even though they had a lot more rights than blacks, they still had fewer rights than normal people had. This means that Meeropol could probably sympathise more than a lot of people. The biggest difference between the poems, I feel, is that in 'Strange Fruit', black people are showed and unhappy but in 'I Too' we read about a man who seems reasonably happy with life but knows he deserves more rights. I feel that the impact that 'Strange Fruit' has one you after reading it can't be compared with 'I Too' as 'Strange Fruit' is such a powerful, moving poem whereas you can read I Too and enjoy the poem, but it doesn't effect your emotions as much. Harriet Smith 11x2 ...read more.