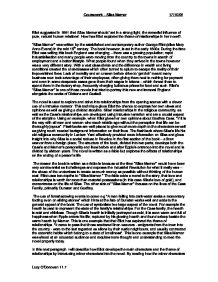 Exploring the theme of relationships in Silas Marner

Eliot suggested in 1861 that Silas Marner should 'set in a strong light, the remedial influence of pure, natural human relations'. How has Eliot explored the theme of relationships in her novel?. ''Silas Marner'' was written by the established and contemporary author George Eliot (alias Mary Anne Evans) in the mid 19th century. The book however, is set in the early 1800s. During the time Eliot was writing this book England was changing - there was a growing population; rapid industrialisation and many people were moving from the country to the towns in search of employment and a better lifestyle. What people found when they arrived in the towns however was a very different story. With a vast class divide and the difference in wealth and living conditions created the underclasses which often turned to opium to escape the reality of their impoverished lives. Lack of morality and an unseen before drive to 'get rich' meant many business men took advantage of their employees, often giving them next to nothing for payment and even in some desperate cases gave them their wages in tokens - which forced them to spend them in the factory shop, frequently charging ludicrous prices for food and such. Eliot's ''Silas Marner'' is one of those novels that tried to portray this new and immoral England alongside the works of Dickens and Gaskell. ...read more.

In this next paragraph I will describe how Eliot develops the main characters and the theme of relationships by introducing minor characters into the novel. By reading how the minor characters get on with the major characters you getter a better insight into the kind of people the major characters are. For example when Dunstan enters the room; ''The door opened, and a thick-set, heavy-looking young man entered, with the flushed face and the gratuitously elated bearing which mark the first stage of intoxication. It was Dunsey, and at the sight of him Godfrey's face parted with some of its gloom to take on the more active expression of hatred. The handsome brown spaniel that lay on the hearth retreated under the chair in the chimney-corner.'' This portrays Dunstan as a man and character that is feared. With Eliot making out Dunstan to be a generally bad person, Godfrey is mentally compared to him by the reader and made to look like a much nicer person. The relationships between Godfrey and Dunstan Cass towards their father seem very distant and dysfunctional. Their mother deceased, the Squire (their father) seems bitter and unloving towards his sons. Only the mysterious other son, Bob, seems favoured. With the symbolism of the hearth Eliot helps to unravel a picture of their dire family life. ...read more.

Godfrey says heatedly 'I wanted to pass for childless once, I shall pass for childless against my wish!'. This brings me on to my next point; how Eliot uses a develped setting is used to show the reflection between how relationships affect how children grow up to become good or bad people. Eliot wanted to portray this Romantic idea of childhood into Silas Marner and the language she used to incorporate this includes the symbolism of the hearth as well as the technique of intrusive narration. The main integration of Romanticism is in the novels separation into two parts. This gave the book a span of more than twenty years and covered Eppie's life between the golden haired two year toddler and the pretty woman of eighteen. Raveloe is described well 'And what could more unlike that of Lantern Yard world than the world in Raveloe - orchards looking lazy with neglected plenty....homesteads, where men supped heavily and slept in the light of the evening hearth..' and gives an accurate portrayal of life in an early 19th century country village. In conclusion I believe Eliot portays Romanticism in her novel but it also has the alternative interpretation of an innocent fable (golden hair, gold, love, living happily ever after..) as well as portraying relationships and how they influence the lives of children in Britain during the transformation from a rural economy to the Industrial Revolution. ?? ?? ?? ?? Coursework - Silas Marner 17/10/06 Lucy O'Donovan 11.7 ...read more.