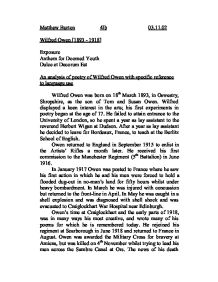 Exposure, Anthem for Doomed Youth, Dulce et Decorum Est - An analysis of poetry by Wilfred Owen with specific reference to language use.

Matthew Burton 4lb 03.11.02 Wilfred Owen [1893 - 1918] Exposure Anthem for Doomed Youth Dulce et Decorum Est An analysis of poetry of Wilfred Owen with specific reference to language use Wilfred Owen was born on 18th March 1893, in Oswestry, Shropshire, as the son of Tom and Susan Owen. Wilfred displayed a keen interest in the arts; his first experiments in poetry began at the age of 17. He failed to attain entrance to the University of London, so he spent a year as lay assistant to the reverend Herbert Wigan at Dudson. After a year as lay assistant he decided to leave for Bordeaux, France, to teach at the Berlitz School of English. Owen returned to England in September 1915 to enlist in the Artists' Rifles a month later. He received his first commission to the Manchester Regiment (5th Battalion) in June 1916. In January 1917 Owen was posted to France where he saw his first action in which he and his men were forced to hold a flooded dug-out in no-man's land for fifty hours whilst under heavy bombardment. ...read more.

Owen questions why he is there and why some of the things he sees are there. He wonders to know if he is seeing this because he is dying and asks the question, knowing he will get no answers. I believe Owen had experience of this somehow, albeit his own or someone close to him. Owen begins to question Gods existence, as he believes that they were sent there to die, not fight for freedom and survival. At the end of four of the stanzas Owen repeats the phrase, "but nothing happens." Owen believes that whatever they do has no effect on the outcome. "Dulce et Decorum Est" is arguably Wilfred Owens most famous poem. What makes this poem so great is the fact of being able to move the reader. It is also an example of writing graphically and from the gut, and he doesn't try to make the poem pretty and nice. He just hurls the pain into the reader's face. The first line gives a great metaphor for being tired. Picturing "old beggars under sacks" tells us these men are battle weary and also hints that they are scared of what is ahead of them. ...read more.

Not only are their lives wasted, but the lives or their loved ones at home are ruined as well. In this poem Owen uses many codes and conventions, the poem becomes easier to understand and at the same time becomes more revealed. The code of comparison is used a lot in this poem. Owen explores the monstrosity of war in various examples of comparison. The soldiers "die as cattle," slaughtered mercilessly. Through personification, the guns responsible for taking so much life are made out to be monstrous, even evil. The poem also likens their death to a funeral, but one where bells are shots, and the mourning choirs are army's bugles. The "drawing-down of blinds," the traditional sign is to show that the family is mourning, has been likened to the drawing of a sheet to cover the dead. Onomatopoeia is used to make the sounds of war real: as if they were really there. We hear the "stuttering rifles" and the "patter" or orisons "hastily uttered." Repetition and alliteration have also been used to make the poem reflect the ordeal that the army faces: monotonous boredom in the terrible conditions, their death, inevitable from the start, will come. ...read more.

This question requires a comparative analysis of three of Wilfred Owen's poems, with particular emphasis on his use of language. This Response to the Question is a nicely structured (though not perfect) answer. The reason it is not perfect is ...

This question requires a comparative analysis of three of Wilfred Owen's poems, with particular emphasis on his use of language. This Response to the Question is a nicely structured (though not perfect) answer. The reason it is not perfect is because it appears to be missing a conclusion the cohesively draws all the comparison point made in the essay into one, summarised ending. As well as this, there are about four/five paragraphs at the beginning of the essay that do not elicit any marks at all - it is a complete waste of time for any candidate studying Wilfred Owen to write at length a biography of his life when the question asks for no such thing. Candidates must be aware that to do this does not count as contextual appreciation - the only context required for the analyses of many of Owen's poems are his experiences at Craiglockhart and the experiences that sent him there. Other than that, the candidate collects no marks for recognising his birthplace of what regiment he was assigned to in which year. If this were an exam paper, the majority of time spent on writing that biography would completely ruin any chances of scoring higher than a D grade because of the time restraints preventing any effectual analysis thereafter with the allotted time.

Where the candidate does succeed to a satisfactory level is when they finally start the analysis. Though, it could be argued that because the candidate has approached the essay poem-by-poem instead of point-by-point, the comparisons made are few and far between and the ones that are there are quite weak. To score highly and with plenty of time left to check your answers, candidates should aim to address this question point-by-point, that is, select a linguistic/poetic device that features in all/some of the poems such as emotive language (appearing in all three) and then comment on it's use in each of the poems, drawing quotes from each poem to analytically compare Owen's use of language. The next point could be personification (of the weaponry) which is is featured in all three, again. And the third point could be his use of imagery - 'Dulce et Decorum est' is the best one here, but the other two are also worth commentary.
By doing the above, there is a more active feel for comparisons in the answer, because candidates will be making comparisons in the same paragraph, rather than across different paragraphs. Examiners like this writing style as well because it shows that the candidate can write abstractly without having to address each poem in turn to find anything comment-worthy.

The Quality of Written Communication, whilst very basic, is very accurately presented. There are no spelling mistakes of grammatical inconsistencies to comment on, though a wider range of punctuation could be used to show the examiners that the candidate possesses a confident flair and enthusiasm for writing by varying sentence structure in their answer.