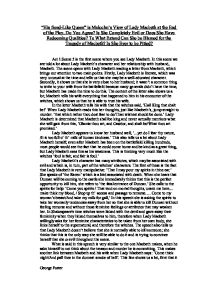 His fiend-Like Queen is Malcolm(TM)s View of Lady Macbeth at the End of the Play, Do You Agree? Is She Completely Evil or Does She Have Redeeming Qualities? To What Extend Can She be Blamed for the Tragedy of Macbeth? Is

"His fiend-Like Queen" is Malcolm's View of Lady Macbeth at the End of the Play, Do You Agree? Is She Completely Evil or Does She Have Redeeming Qualities? To What Extend Can She be Blamed for the Tragedy of Macbeth? Is She Ever to be Pitied? Act 1 Scene 5 is the first scene where you see Lady Macbeth. In this scene we are told a lot about Lady Macbeth's character and her relationship with husband, Macbeth. The scene opens with Lady Macbeth reading a letter from Macbeth, which brings our attention to two main points. Firstly, Lady Macbeth is literate, which was very unusual at the time and tells us that she may be a well-educated character. Secondly, it shows us that she is very close to her husband; it wasn't a common thing to write to your wife from the battlefield because many generals didn't have the time, but Macbeth has made the time to do this. The content of the letter also shows us a lot; Macbeth tells his wife everything that happened to him in his encounter of the witches, which shows us that he is able to trust his wife. In the letter Macbeth tells his wife that the witches said, 'Hail King that shalt be!' When Lady Macbeth reads this her thoughts, just like Macbeth's, jump straight to murder: 'that which rather thou dost fear to do/Than wishest should be done.' Lady Macbeth is determined that Macbeth shall be king and never actually mentions what she will gain from this, 'Glamis thou art, and Cawdor, and shalt be/What thou art promised.' Lady Macbeth appears to know her husband well, '...yet do I fear thy nature, /It is too full o' th' milk of human kindness.' This also tells us a lot about Lady Macbeth herself; even after Macbeth has been on the battlefield killing hundreds, most people would see the fact that he could come home and be kind as a great thing, but Lady Macbeth sees this as his weakness. ...read more.

Lady Macbeth isn't a very understanding woman, another sign that she isn't very clever: when Macbeth comes in he is traumatized by what he has just done, instead of Lady Macbeth being caring and understanding she gets angry at him, 'Why did you bring these daggers from the place? They must lie there. Go carry them, and smear / The sleepy grooms with blood.' When Macbeth looks at his b****y hands and says, 'This is a sorry sight.' Lady Macbeth replies with 'A foolish thought, to say a sorry sight.' That is also a sign of her practicality she is trying to get Macbeth to not dwell on his thoughts. Then there is also another sign of nervousness between them both with the short exchanges when they first meet: 'Macbeth: When? Lady Macbeth: Now. Macbeth: As I descended? Lady Macbeth: Ay.' Lady Macbeth isn't very understanding at all of what her husband is going through and tells him, 'Consider it not so deeply.' In act 2 scene 3 we see examples of Lady Macbeth's practicality and ability to act. The scene opens with Macduff and Lennox entering, wishing to see the King and then finding him dead. Lady Macbeth enters and we see how her acting abilities are still strong, with her pretending she has no idea what has happened 'What's the business,' and it comes across that she genuinely doesn't seem to have an idea about what is going on. There is the irony of Macduff calling her, 'O gentle lady,' when earlier we are given these horrible images by her, 'And dashed the brains out'. She then manages to keep up the charade by coming across as horrified by the death of the King, 'Woe, alas! / What, in our house?' Macbeth then enters and starts to give these flowery speeches: 'The wine of life is drawn,' and 'his gashed stabs looked like a breach in nature': when these are compared to the initial reaction of Macduff, 'O horror, horror, horror!' ...read more.

Throughout the scene there is more imagery of blood, we have Lady Macbeth mocking Macbeth about being upset about killing Duncan, now she is saying: 'Who would have thought the man has so much blood in him.' At first she acted as if she was fine and didn't have a conscience, we now see that everything had built up and has been affecting her: 'The Thane of Fife had a wife; where is she now? What, will these hands ne'er be clean?' She is even suffering for the murders she had nothing to do with. After reading 'Macbeth' and carefully analysing Lady Macbeth's actions throughout I think we are able to feel some pity for Lady Macbeth. I think she can be blamed partly for the Tragedy of 'Macbeth' because she did push her husband to commit the murder, but we do not fully see what her motivation for this was. My view is that she was mainly doing what she thought her husband deserved because it is obvious through the play that she is deeply in love with Macbeth. Also taking into consideration the time the play is set was it not Macbeth's place to stick with what he originally felt and tell her that they would not murder the King? I think pity grows towards her as the play goes on; as the reader you can see a change in her character, which quite clearly shows us that she never intended for Macbeth to become the'evil tyrant' he did become. Another reason for her to be pitied is that you can see she is in pain and suffering but she ignores this to try and comfort her husband who is more open about his suffering. This drives Lady Macbeth crazy in the end, and the idea that she died because of her love for her husband is tragic. This is why I think Malcolm's view of lady Macbeth, 'His fiend-Like Queen' is unfair towards her and that it was Macbeth's place to have put a stop to the murder which eventually led to both of their deaths. George Foster ...read more.