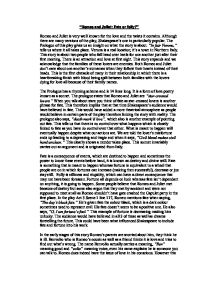 Romeo and Juliet: Fate or folly?

"Romeo and Juliet: Fate or folly?" Romeo and Juliet is very well known for the love and the twists it contains. Although there are many versions of the play, Shakespeare's one is particularly popular. The Prologue of this play gives us an insight on what the story is about. "In fair Verona," tells us where it all takes place. Verona is a real location; it's a town in Northern Italy. This story is about two people who fall head over heels for one another just after their first meeting. There is an attraction and love at first sight. This story expands and we acknowledge that the families of these lovers are enemies. Both Romeo and Juliet don't care about one another's surnames when they follow their hearts instead of their heads. This is the first obstacle of many in their relationship in which there is a heartbreaking finish with blood being spilt between both families with the lovers dying for love all because of their family names. The Prologue has a rhyming scheme and is 14 lines long. It is a form of love poetry known as a sonnet. The prologue states that Romeo and Juliet are "star-crossed lovers." When you talk about stars you think of fate as star-crossed lovers is another phrase for fate. This therefore implies that at that time Shakespeare's audience would have believed in fate. This would have added a more theatrical atmosphere as people would believe in certain parts of the play therefore linking the story with reality. ...read more.

This is because of the language and the way love has been publicized. Juliet, from her balcony, proclaims her love for Romeo, who is below in the Capulet orchard. This balcony scene is very symbolic because it doesn't just show two people declaring their love for one another. It actually shows the light and darkness. Romeo imagines that she is the sun, transforming the darkness into daylight. Romeo similarly personifies the moon, calling it "envious" as well as "sick and pale with grief." He believes Juliet, the sun is far brighter and more beautiful. These quotes are essential because as well as it being the play's most imaginative, beautiful and prominent moment in form of a sonnet, it is also a prime example of the light and dark motif, which runs throughout the play. This contributes to setting a particular mood in the scene. Many scenes in Romeo and Juliet are set either late at night or early in the morning, and Shakespeare often uses the contrast between night and day to describe their current situations. Juliet makes a key point when she starts talking in line 33. She tells us she is willing to denounce her name, and no longer be a Capulet because she is so in love with Romeo. She doesn't see the importance of a name when she questions, "What's Montague? It is nor hand, nor foot..." This is a motivating argument, which explains that a name isn't of any importance when you experience love. Juliet is a lot more mature than Romeo and for her age. ...read more.

This is because both lovers behaved foolishly because they were in love. They got married in a rush without trying to tell their families of their love in hope it could bring the Capulet's and Montague's together. Instead the pair acted without thinking of the consequences first. Their behaviour was very irrational. Also the Nurse and Friar could be blamed for this tragedy too. Instead of putting an ending to this silly behaviour they helped the lovers out. However Shakespeare goes to a great length in showing the parents are the ones to blame. The feud is the real cause of the teenage deaths. Their love is "death-mark'd" because of their parents' rage. In the last scene, the Prince blames the Capulet and Montague. He continues saying everyone has been punished by the deaths of those they love, including him because of the death of Mercutio. So as my conclusion I think that the tragedy of Romeo and Juliet was a mixture of both fate and folly. Fate because of the unusual way they met, as if it was meant to be and the way their families were enemies. There were a lot of indications to fate in this play which could be used as evidence to the fact that fate did exist in this story. Also in addition to fate I believe there was also folly involved. As normal teenagers Romeo and Juliet didn't think their action through enough. They didn't realise what they got themselves into when they fell head over heels for each other. It was silly mistakes like taking the poison in the first place and not receiving the note that also caused the death of these two innocent human beings. ?? ?? ?? ?? ...read more.