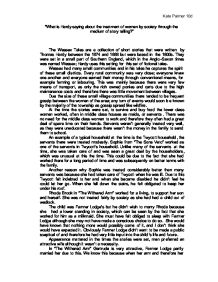 What is Hardy saying about the treatment of women by society through the medium of story telling?

"What is Hardy saying about the treatment of women by society through the medium of story telling?" The Wessex Tales are a collection of short stories that were written by Thomas Hardy between the 1874 and 1888 but were based in the 1800s. They were set in a small part of Southern England, which in the Anglo-Saxon times was named Wessex; Hardy uses this setting for this set of fictional tales. Wessex had many small communities and in his tales he captures the spirit of these small districts. Every rural community was very close; everyone knew one another and everyone earned their money through conventional means, for example farming or labouring. This was mainly because there were very few means of transport, as only the rich owned ponies and carts due to the high maintenance costs and therefore there was little movement between villages. Due the size of these small village communities there tended to be frequent gossip between the women of the area; any turn of events would soon be known by the majority of the township as gossip spread like wildfire. At the time the stories were set, to survive and buy food the lower class women worked, often in middle class houses as maids, or servants. There was no need for the middle class women to work and therefore they often had a great deal of spare time on their hands. ...read more.

In "The Withered Arm," Gertrude Lodge appears to be a very "modest woman." She doesn't boast or brag about marrying the farmer and seems very shy and introverted. When she first appeared in public at the church on the Sunday, "all... eyes were fixed upon her" and the congregation were judging her for her appearance and the first impressions she made. This made it very hard for her, because, due to her modesty, she found it most irritating and upsetting when her dress kept brushing against the pews making rather a lot of unwanted noise. I think this shows that Gertrude is treated with very little privacy as the people of the village wish to see her at the first chance they find. This shows that women are judged very quickly on appearance and therefore sometimes aren't given a chance to reveal their personalities and character. In "The Distracted Preacher," Stockdale appropriately thinks that Lizzy should be kept safe and away from the smugglers who he believes are a dire influence on her. He also believes she shouldn't profit from such a trade although he very rarely mentions it to her face. However Stockdale shows these angry emotions when Lizzy "... is in mans clothes..." and he exclaims how "ashamed" he is of her; he obviously thought it was "indecent" of a women to wear such male attire. ...read more.

She thought Stockdale was over reacting and that is why she refuses to stop participating in the smugglers trade. After studying the Wessex tales in some depth I have come to the conclusion that women were treated differently due to their class. Lower class women had to work whereas middle and upper class women had lower class women working for them. Lower class women were often treated quite well by their employers; they weren't well educated as there wasn't the money to educate them to the high standard of the middle classes. Education wasn't a choice which lower class women were given as their parents often wished them to be out making money as soon as possible. I concluded that appearance was quite important for women at the time as men preferred to have an attractive woman as their wife. Appearance mattered more to different people, some men thought appearance was more important than others. Middle class women often spent more time on their appearance due to the fact they didn't work and had more time on their hands. Women in the era the stories were set, were often underestimated. Men tended to think that women were not up to doing things they could very well manage. They also found it improper for a woman to act anything like a man and therefore the wearing of men's clothing or doing masculine work was deeply discouraged. ...read more.