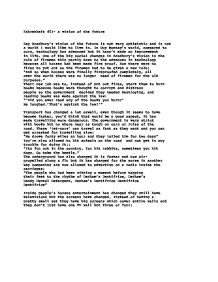 Fahrenheit 451- a vision of the future

Fahrenheit 451- a vision of the future Ray Bradbury's vision of the future is not very optimistic and is not a world I would like to live in. In Guy Montag's world, compared to ours, technology has advanced but it hasn't made an improvement in life. One of the big social changes in Bradbury's vision is the role of firemen this partly down to the advances in technology because all houses had been made fire proof. ...read more.

He laughed.'That's against the law!'" Transport has changed a lot aswell, even though it seems to have become faster, you'd think that would be a good aspect, it has made travelling more dangerous. The government is very strict with books but no where near as tough on cars or rules of the road. These 'jet-cars' can travel as fast as they want and you can get arrested for travelling slow: "He drove forty miles an hour and they jailed him for two days" You're also allowed to hit animals on the road and not get in any trouble for doing it:: "Its fun out in the country. ...read more.

Go take the beetle." The underground has also changed it is faster and now air- propelled along a flu but it has changed for the worse in another way companies are now allowed to advertise on a radio inside the carriages: "The people who had been sitting a moment before tapping their feet to the rhythm of Denham's Dentifrice, Denham's Dandy Dental Detergent, Denham's Dentifrice Dentifrice Dentifrice" Inside people's houses entertainment has changed they still have televisions but the screens have changed. Instead of having a pretty small set they have big screens which cover entire walls and they don't just have one TV wall but three or four: ...read more.