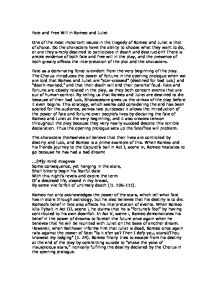 Fate and Free Will in Romeo and Juliet

Fate and Free Will in Romeo and Juliet One of the most important issues in the tragedy of Romeo and Juliet is that of choice. Do the characters have the ability to choose what they want to do, or are they simply destined to participate in death and destruction? There is ample evidence of both fate and free will in the play, and the presence of both greatly affects the interpretation of the plot and the characters. Fate as a dominating force is evident from the very beginning of the play. The Chorus introduces the power of fortune in the opening prologue when we are told that Romeo and Juliet are "star-crossed" (destined for bad luck) and "death-marked," and that their death will end their parents' feud. Fate and fortune are closely related in the play, as they both concern events that are out of human control. By telling us that Romeo and Juliet are destined to die because of their bad luck, Shakespeare gives us the climax of the play before it even begins. This strategy, which seems odd considering the end has been spoiled for the audience, serves two purposes: it allows the introduction of the power of fate and fortune over people's lives by declaring the fate of Romeo and Juliet at the very beginning, and it also creates tension throughout the play because they very nearly succeed despite this terrible declaration. ...read more.

Faith in destiny and luck was typical in the Renaissance, and Shakespearean audiences would not have questioned the dominance of these concepts in the lives of the characters. Indeed, it would have seemed odd if the characters did not believe in the power of fate or in the ability of the stars to dictate lives. Not only does Shakespeare make the case for the power of fate in terms of the characters' beliefs in the play, but he also strengthens it by including a multitude of ironic statements that predict events in the play. Romeo and Mercutio both predict their own deaths through their statements in Act I, scene iv, and Act III, scene 1, respectively, and Juliet foresees Romeo's death in Act III, scene v. Friar Laurence makes several prophetic statements throughout the play, including the infamous "Wisely and slow. They stumble that run fast," from the end of Act II, scene iii, which predicts the mistake that he himself will make at the play's climax. Even Lady Capulet, in her anger over her daughter's defiance, wishes that Juliet "were married to her grave," in Act III, scene v, which will indeed become the case. Through these statements and the opinions of the characters themselves, Shakespeare would seem to indicate that the power of fate over humanity is unbreakable, and even the power of love cannot overcome it. The power of fate to control our lives seems insurmountable in light of what the characters say in Romeo and Juliet, but when we consider what they actually do, the issue becomes much more problematic. ...read more.

No one makes Juliet take the potion; she does so of her own free will. She also chooses to kill herself rather than confront her parents once Romeo has committed suicide. All of the characters in the play have options, and it is their actions, which contradict their belief in fate, that lead to the deaths that occur. The problem of fate and free will in Romeo and Juliet is a difficult one indeed. There are obvious examples of "accidents" in the play: the servant who encounters Romeo and Benvolio and invites them to the Capulet party, the meeting of Romeo and Juliet, the quarantine of Friar John, and the presence of Paris at the tomb when Romeo arrives. These accidents and the beliefs of the characters in the power of fate and fortune suggest that Romeo and Juliet are indeed death marked. There are, however, obvious circumstances where the characters choose their actions of their own free will: the feud itself, the decision of Romeo and Juliet to marry each other, the fight in Act III, scene i, and the suicides of Romeo and Juliet. The characters choose these actions of their own accord, and nothing has forced them to follow the paths they have chosen for themselves. What, then, is the "greater power" that the characters cannot contradict? The only definitive answer is the same as it is for any story: their author. ...read more.