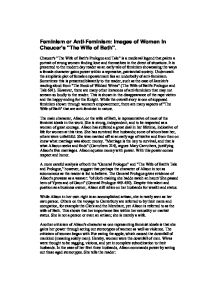 Feminism or Anti-Feminism: Images of Women in Chaucer's &quot;The Wife of Bath&quot;.

Feminism or Anti-Feminism: Images of Women in Chaucer's "The Wife of Bath". Chaucer's "The Wife of Bath's Prologue and Tale" is a medieval legend that paints a portrait of strong women finding love and themselves in the direst of situations. It is presented to the modern day reader as an early tale of feminism showcasing the ways a female character gains power within a repressive, patriarchal society. Underneath the simplistic plot of female empowerment lies an underbelly of anti-feminism. Sometimes this is presented blatantly to the reader, such as the case of Janekin's reading aloud from "The Book of Wikked Wives" (The Wife of Bath's Prologue and Tale 691). However, there are many other instances of anti-feminism that may not scream so loudly to the reader. This is shown in the disappearance of the rape victim and the happy ending for the Knight. While the overall story is one of supposed feminism shown through women's empowerment, there are many aspects of "The Wife of Bath" that are anti-feminist in nature. The main character, Alison, or the wife of Bath, is representative of most of the feminist ideals in the work. She is strong, independent, and to be respected as a woman of great courage. ...read more.

(The Wife of Bath's Prologue and Tale 225-229) Alison also utilizes violence as a means of obtaining power. While her first three husbands are old, wealthy and easily tricked, her fifth husband is twenty years her junior and has many ideas of what a wife's role is. He uses violence as a means to control her. Alison testifies to the reader, "that feele I on my ribbes al by rewe/ and evere shal unto myn ending day" (The Wife of Bath's Prologue and Tale 513-514). She responds by using violence against him and in turn, he gives up some of his power. She claims, "he yaf me al the bridel in myn hand/ To han the governance of hous and land" (The Wife of Bath's Prologue and Tale 819-820). Alison is portrayed as an anti-feminist in that she is unable to gain power through methods of intelligence and independence. She instead uses violence and acts out negative stereotypes of women. The ambiguity of the role of feminism in The Wife of Bath is complicated further in the casual manner in which the rape and the victim of rape are treated. And happed that, allone as he was borne/ he sawgh a maide walking him biforn/ of which maide anoon, maugree hir heed/ By verray force he rafte hir maidenheed. ...read more.

In a very metaphorical sense, the Knight is raped through this justice. It is arguable that the Knight is punished and thereby, "The Wife of Bath's Tale" remains a feminist tale. However, I would assert that the rather happy ending assigned to the knight denotes the presence of anti-feminism. The end result is the Knight's long life of happiness, "and thus they live unto hir lives ende/ in parfit joye" (The Wife of Bath's Prologue and Tale 1263-1264). In this tale the rapist is freed from punishment and ultimately rewarded with a young, beautiful, and faithful wife. The tale of "The Wife of Bath" displayed both intriguingly feminist ideas for its time, and also subtle anti-feminist rhetoric. The main character, Alison, represents the empowered woman. Yet, the portrayal of the young maiden demonstrates the need in medieval times to place women into categories, thereby making it easier for them to be dominated. With the absence of the maiden, the knight is turned into the hero of the tale, with the reader hoping for a happy ending for him. "The Wife of Bath's Prologue and Tale" can be seen as both a legend of women's empowerment as well as a reminder of the struggles women encountered daily. ...read more.

This is a good essay and shows a clear understanding of the characters and the messages communicated. The analysis of language is carried out but there needs to be more of a focus on structure and form and how they are used to shape meaning.