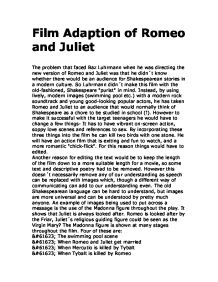 Film Adaption of Romeo and Juliet.

Film Adaption of Romeo and Juliet The problem that faced Baz Luhrmann when he was directing the new version of Romeo and Juliet was that he didn�t know whether there would be an audience for Shakespearean stories in a modern culture. So Luhrmann didn�t make this film with the old-fashioned, Shakespeare "purist" in mind. Instead, by using lively, modern images (swimming pool etc.) with a modern rock soundtrack and young good-looking popular actors, he has taken Romeo and Juliet to an audience that would normally think of Shakespeare as a chore to be studied in school (!). However to make it successful with the target teenagers he would have to change a few things- It has to have vibrant on-screen action, soppy love scenes and references to s*x. By incorporating these three things into the film he can kill two birds with one stone. He will have an action film that is exiting and fun to watch, and a more romantic "chick-flick". For this reason things would have to edited. ...read more.

Luhrmann manages to show this without saying it in speech by using the family crest on the b**t of their guns for example. Less direct, but effective. However, perhaps one of the most obvious uses of imagery is water. It appears at many key scenes throughout the film and shows purity and clarity of thought, often adding one of these to the situation. Romeo washes his face in water at the party, which clears his mind of drugs and he sees Juliet in a clearer light. Romeo and Juliet�s first vision of each other are through a fish tank full of water. Water could also be seen as an object to show fate working. When both Mercutio and Tybalt die there is water very much present (seaside/fountain respectively). The swimming pool, obviously full of water, is used in a key part of Romeo and Juliet, a point where it could be make or break for their relationship. Despite the changes to the text to show imagery and meanings in visual ways, there are some scenes that are changed with no reason other than to be different. ...read more.

In the modern film adaptation the Prologue plays a huge part at the beginning of the film. It is played 3 times over. Once by the news reporter on the television, again on signs around Verona City, and again as text flashing on the screen. In the film the prologue is used to wet peoples appetite and get them interested and exited- loud powerful music and action during the prologue do this effectively. The director has also done the clever thing of making each scene contrast from the previous and the next. This juxtaposition not only makes the film more exiting to watch, but can highlight differences in peoples feelings and actions, and how it can effect others. A point where this can be seen is after Romeo and Juliet have been married, a scene of much joy and hope is contrasted sharply with the following more violent scene. In this scene Mercutio is killed by Tybalt, a scene where there is a raging sea and no sign of hope, and it is apparent that their marriage isn�t going to work out at all. ...read more.