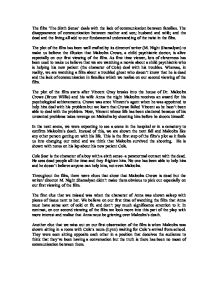 The plot of the film has been well crafted by its director/ writer (M. Night Shamalyan) to make us believe the illusion that Malcolm Crowe, a child psychiatric doctor, is alive especially on our first viewing of the film. As first time viewer, lots of cleverness has been used to make us believe that we are watching a movie about a child psychiatric who is helping his new patient (the character of Cole) deal with his troubles. Whereas, in reality, we are watching a film about a troubled ghost who doesn’t know that he is dead and the lack of communication in families which we realise on our second viewing of the film.

The plot of the film starts after Vincent Gray breaks into the house of Dr. Malcolm Crowe (Bruce Willis) and his wife Anna the night Malcolm receives an award for his psychological achievements. Crowe was once Vincent’s agent when he was appointed to help him deal with his problem but we learn that Crowe failed Vincent as he hasn’t been able to deal with the problem. Now, Vincent whose life has been shattered because of his unwanted problems takes revenge on Malcolm by shooting him before he shoots himself.

In the next scene, we were expecting to see a scene in the hospital or in a cemetery to confirm Malcolm’s death. Instead of this, we are shown the next fall and Malcolm like any other person getting on with his life. This is the first step of the film’s plot as it fools us into changing our mind and we think that Malcolm survived the shooting.  He is shown with notes on his lap about his new patient Cole.

Cole Sear is the character of a boy with a sixth sense- a paranormal contact with the dead. He sees dead people all the time and they frighten him. No one has been able to help him and he doesn’t believe anyone can help him, not even Malcolm.

Throughout the film, there were clues that show that Malcolm Crowe is dead but the writer/ director M. Night Shamalyan didn’t make them obvious to pick out especially on our first viewing of the film.

The first clue that we missed was when the character of Anna was shown asleep with pieces of tissue next to her. We believe on our first time of watching the film that Anna must have some sort of cold or flu and don’t pay much significance attention to it. In contrast, on our second viewing of the film we look more into this part of the play with more interest and realise that Anna must be grieving over Malcolm’s death.

Another clue that we miss out on our first observation of the film is when Malcolm was shown sitting in a room with Cole’s mum (Lynn) waiting for Cole’s arrival from school. They were seen sitting opposite each other in a position that deceives the audience to think that they’ve been having a conversation but the truth is there has been no mean of communication between them.

M. Night Shamalyan also uses the speech of the characters to furthermore deceive us to believe the illusion that Malcolm is alive. An example of this was when Cole arrived from school and Lynn went to meet him by the door and started talking about how their days went. Along the line, Lynn says to Cole “You’ve got an hour”. This was a brilliant idea used by the director as the audience believe that she means he has an hour to talk to Malcolm which we believe on our first viewing. Whereas, the truth is that she meant he has an hour to get ready which we realise on our second viewing of the film.

After this scene, we see Anna (Malcolm’s wife), in a romantic Italian restaurant sitting by herself. After a while, Malcolm walks into the room and sat on a chair opposite her. He started to talk her about Cole and the audience are made to believe that she is listening but listening angrily for being late and putting his work first ahead of her. This helps to hide illusion of Malcolm’s death from the audience and this was furthermore kept away from the audience when Anna did look up. But, if we listen carefully, there were some laughter in the background and she must have been curious about it and looks up to see where it is coming from.

In the hospital scene where Cole informs Malcolm of his secret; “I see dead people I see them all the time, they see what they want to see they don’t know that they are dead” was the most revealing part of the film. On our first sighting of the film we miss out this really important clue as all what Cole says describe the current situation that Malcolm is in the play but we realise this on our second viewing.

Moreover, Malcolm’s clothing throughout the film was brilliant done by the writer/director of the play keep the illusion that Malcolm Crowe is dead from the audience is. Throughout the film, Malcolm was kept in the same clothes. He was kept in the same blue shirt and a black trouser he had on when he was shot throughout the film. At times, we see him with a long grey jacket over his cloth and at other times, we see him with a grey sweatshirt, which he wore and then took off the night Vincent shot him. This was another cleverness used by M. Night Shaymalyan to hide Malcolm’s death from us.