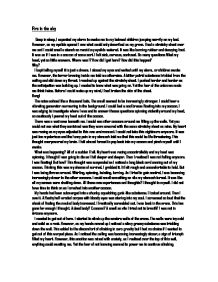 Fire In The Sky

Fire in the sky Deep in sleep, I expected my alarm to awake me to my beloved children jumping merrily on my bed. However, as my eyelids opened I saw what could only described as my grave. I had a stretchy sheet over me and I could smell a stench so rancid my eyelids watered. It was like burning rubber and decaying food. It was as if I was in a cocoon of some sort. I felt sick, nervous, confused. So many questions filled my head, yet so little answers. Where was I? How did I get here? How did this happen? Why? I kept telling myself it is just a dream. I closed my eyes and waited until my alarm, or children awoke me. However, the terror brewing inside me told me otherwise. A bitter putrid substance trickled from the ceiling and slid down my throat. I reached up against the stretchy sheet. I pushed harder and harder as the anticipation was building up. I needed to know what was going on. Yet the fear of the unknown made me think twice. Before I could make up my mind, I had broken the skin of the sheet. ...read more.

It was my motorbike keys. Finally, something I recognised! They started floating down into the deep cave, so I quickly pushed myself down to attempted to grasp them. The keys were gently floating down, and then landed on a metal grid. I kept pushing myself down until I landed onto the grid also. I could feel a sweltering gas rising from the grid. I looked around. I saw the aliens again. However, once more they were not moving. I was confused. Surely, they had noticed me. There huge beady eyes and metallic silver bodies just limply floated. I was keen to know whether they were real so I drifted over. As I got closer, the fear kicked in. What if I made them angry? What if I awoke them? Why haven't they noticed me? Surrounded by thoughts, I didn't realise how close I was to it. I place my hand on the alien. It felt like an icy cold metal and it sent shivers up my spine. As I turned it around, I saw the electrical components, wires, chips. It looked like the inner workings of a computer. ...read more.

I felt like a rabbit being mangled by vicious foxes. All I could do was wait until the pain stopped. However, I knew this was not the end. A milky white liquid was squirted into my eye. It stung so hard that I thought I was going blind as it made me feel extremely dizzy. I was a victim. Yet back at home, people helped victims. I was my only hero and I was the one who needed saving. The milky substance evaporated. That was the only positive part of this horrendous assassin. I could see clearly again. But that thought evaporated as well as I saw the machine emerge towards me. I knew it had some sort of evil powers. It came to a sudden stop. Then a needle came out. Closer and closer Rapidly faster My heart was pounding out of my chest. I wanted to shut my eye but the clamp stopped me. This is my death I thought. Closer The fear in my heart was uncontrollable. Nothing could stop the manic thoughts whizzing around my head. Questions without answers. However, there was one I knew I could not answer... Why me? By Danielle Jones ...read more.