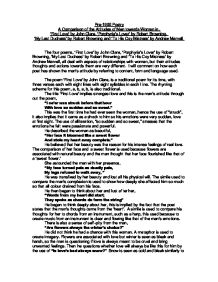 The simile, "As a shut bud that holds a bee", is used to compare her eyes during death to how a flower holds a bee because as it is delicate and slow but also firmly closed like 'Porphyria's' eyes. He believed that he she would have wanted him to react the way he did, "And I, its love, am gained instead! Porphyria's love: she guessed not how Her darling one wish would be heard." Again he is justifying his actions by telling himself that now she can be his forever like she wanted. He is happy because now all of her problems were solved; she had no other commitments and she can now be with him evermore. This shows that he is insane because he is happy to have his love dead just so he can have her for himself. This is very different to 'First Love' as he realised he could not have her so did nothing but the man in 'Porphyria's Lover' was so obsessed that he sought extremely violent actions to make her his. 'My Last Duchess' also written by Robert Browning like 'Porphyria's Lover' is a dramatic monologue, but with a different rhyming pattern, a, a, b, b, and longer line length with ten syllables. The title 'My Last Duchess' implies that it is a duke talking about his last wife. The man is pretentious about his belongings, "I call That piece a wonder, now: Fr� Pandolf's hands Worked busily a day and there she stands." He is eager to show off the painting of his late wife, we know she is no longer alive because the poet writes 'as if she were alive,' to his guest. ...read more.

He was only interested in the physical aspects of their relationship and did not care about her feelings but is pressurising her to fulfil his hopes. Then in his synthesis he yet again changed his manner towards her by trying to be complimentary, "Now, therefore, while the youthful hue Sits on thy skin like morning dew," He again mentions the aspect of time while complimenting her beauty. He did this to seem kind and to change her emotions towards him because he had just been very insensitive towards her feelings. He then tried to be very suggestive rather than forceful like before, "Let us roll all our strength, and all Our sweetness, up into one ball:" He tried to make his partner think that it was not only his needs that he was trying to fulfil but hers as well; this is shown by the use of 'our pleasures.' He only cared about adding s****l elements to their relationship and thought they were wasting their time together by not becoming intimate with each other. I think these four poems show very different male attitudes. In 'First Love' the man was overwhelmed by love; in 'Porphyria's Lover' the man's obsession turned to extreme violence; in 'My Last Duchess' the man was very controlling, arrogant and stubborn towards his wife and in 'To His Coy Mistress' the man was very persistent and uncaring towards his partner. The poems show that not all men are the same as some can be very caring whereas others only care about themselves; there is still this aspect about male attitudes in today's society making these poems easy to relate to. Word Count (not including title)- 2,936 ...read more.