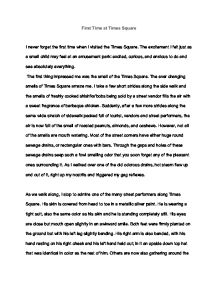 First Time at Times Square I never forget the first time when I visited the Times Square. The excitement I felt just as a small child may feel at an amusement park: excited, curious, and anxious to do and see absolutely everything. The first thing impressed me was the smell of the Times Square. The ever changing smells of Times Square amaze me. I take a few short strides along the side walk and the smells of freshly cooked shish'ka'bobs being sold by a street vendor fills the air with a sweet fragrance of barbeque chicken. Suddenly, after a few more strides along the same wide stretch of sidewalk packed full of tourist, vendors and street performers, the air is now full of the smell of roasted peanuts, almonds, and cashews. ...read more.

His right arm is also bended, with his hand resting on his right cheek and his left hand held out; in it an upside down top hat that was identical in color as the rest of him. Others are now also gathering around the futuristic silver man with the same curiosity and amusement. As we drop some money into his hat then step back and wait, he starts to move a little; he robotic moves his hat with short, abrupt yet controlled movements up to his metallic ear and gives it a shake, causing the coins within to jingle as it clashes against one another. His smile fades into a frown as his hat drops back down, clearly, it wasn't enough. As he resumes in his previous lifeless state, a few others drop in more coins. ...read more.

He begins to dance whimsically, prancing around his small audience including myself. Getting bored and feeling a little let down I move on. Wanting to see Times Square at night, when all of its glorious lights are bright, and the billboards come to life, we decide to check out other places then return when the sun is down, and the lights of New York take over to light the streets This is my first impression of Times Square in New York City, it reminds me a saying about New York City from writer Theodore Dreiser: " The thing that impressed me then as now about New York... was the sharp, and at the same time immense, contrast it showed between the dull and the shrewd, the strong and the weak, the rich and the poor, the wise and the ignorant... the strong, or those who ultimately dominated, were so very strong, and the weak so very, very weak - and so very, very many." ...read more.

This is an effective description of the essay writer's impressions of the sights, sounds and smells of Times Square. It begins a little shakily, with some punctuation issues, unnecessary repetition and slips into the Past Tense but once the subject takes over the control of language and structure improves dramatically.