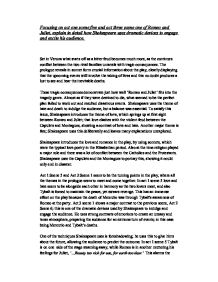 Focusing on act one scene five and act three scene one of Romeo and Juliet, explain in detail how Shakespeare uses dramatic devices to engage and excite his audience.

Focusing on act one scene five and act three scene one of Romeo and Juliet, explain in detail how Shakespeare uses dramatic devices to engage and excite his audience. Set in Verona what starts off as a bitter feud becomes much more, as the continues conflict between the two rival families unravels with tragic consequences. The prologue reveals in sonnet form crucial information about the play, clearly displaying that the upcoming events will involve the taking of lives and this no doubt produces a l**t to see and hear the inevitable deaths. These tragic consequences demonstrate just how well 'Romeo and Juliet' fits into the tragedy genre. Almost as if they were destined to die, what seemed to be the perfect plan failed to work out and resulted disastrous events. Shakespeare uses the theme of hate and death to indulge the audience, but a balance was essential. To satisfy this issue, Shakespeare introduces the theme of love, which springs up at first sight between Romeo and Juliet; that love clashes with the violent feud between the Capulets and Montagues, showing a contrast of love and hate. Another major theme is fate; Shakespeare uses this deliberately and leaves many explanations unexplored. Shakespeare introduces the love and romance in the play, by using sonnets, which were the typical love poetry in the Elizabethan period. ...read more.

Shakespeare uses the entrances and exits of characters as a dramatic device to promote a variety of reactions within the audience; sometimes anxiety, other times fear. Words have been spoken, a kiss has been shared; Romeo and Juliet, all alone, completely oblivious to the rest of the world... And at that instant, the bubble is burst. "Madam your mother craves a word with you." Drama was building up and the audience felt dragged in and romantic, however Shakespeare uses the nurse's entrance to hook the audience's attention and remind them of the surrounding. He does that by mentioning Juliet's mother, reminding them that they are enemies, and their love will cost their lives. Meanwhile Tybalt's rage can only multiply as he watches Romeo enjoying himself. He turns to Capulet, and here Shakespeare creates an expectation from the audience that Capulet will be angered and a fight will be approaching. However when this isn't the case, enraged Tybalt dramatically leaves, leaving behind a thrilling promises for the audience, gripping their full attention. "I will withdraw, but this intrusion shall, now seeming sweet, convert to the bitt'rest gall.' Shakespeare again, uses this technique in act 3 scenes 1, however this time to welcome the entrance of Tybalt. The scene begins with Mercutio and frightened Benevolio. "The day is hot, the Capulets abroad; if we meet we shall no 'scape a brawl," Shakespeare creates that suspense and uneasiness in the air, before Tybalt's arrival deliberately, preparing the audience for a fight. ...read more.

"I'll amerce you with so strong a fine, that you shall repent the loss of mine." Shakespeare deliberately relates Mercutio to the prince so this way the audience will see just how provoked and furious he is. He's rage amuses the audience and Shakespeare makes sure their attention is fully hooked. He also promises that someone will pay for the recent happenings: "I'll amerce you with so strong a fine." which excites the audience as they ache to know who. Act 1 scene 5 and act 3 scene 1 are the two turning points, making them the most important scenes in the play. Certain events in these scenes are the events that lead to the catastrophic ending. Mercutio and Tybalt's deaths were due to Tybalt's realisation of Romeo at the Capulet ball, which then lead on to Romeo's banishment from Verona. Shakespeare makes these scenes entertaining and enjoyable for the audience by using various techniques and devices. One of the most effective devices is finding the correct balance; though hate overpowers love, Shakespeare includes many themes to satisfy every individual in the audience. He builds up tension, and creates hope though the audience are well aware that the characters have no alternative destiny. This way he plays with the audience's emotions, right from the beginning to the very end. I personally think the play as a whole is very well thought out and skilfully written; and as for the two scenes, I believe they have been cleverly manufactured to entertain, continuously holding the audience's full attention. ...read more.