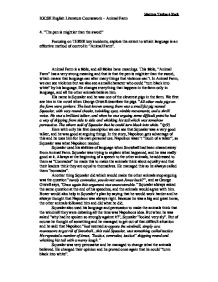 Focusing on THREE key incidents, explore the extent to which language is an effective method of control in &quot;Animal Farm&quot;.

IGCSE English Literature Coursework - Animal Farm 4. "The pen is mightier than the sword" Focusing on THREE key incidents, explore the extent to which language is an effective method of control in "Animal Farm". Animal Farm is a fable, and all fables have meanings. This fable, "Animal Farm" has a very strong meaning and that is that the pen is mightier than the sword, which means that language can alter many things that violence can't. In Animal Farm, we can see violence but we also see a small character who could "turn black into white" by his language. He changes everything that happens in the farm only in language, and all the other animals believe him. His name is Squealer and he was one of the cleverest pigs in the farm. We first see him in the novel when George Orwell describes the pigs. "All other male pigs on the farm were porkers. The best known among them was a small fat pig named Squealer, with very round cheeks, twinkling eyes, nimble movements, and a shrill voice. ...read more.

Because he was a big and great horse, the other animals followed him and did what he did. Squealer also used his language and persuasion to make the animals think that the windmill they were debating all the time was Napoleons idea. But when he was asked "why had he spoken so strongly against it?", Squealer "looked very sly". But of course he thought of something and he managed to get out of that difficult situation and he said that Napoleon "had seemed to oppose the windmill, simply as a manoeuvre to get rid of Snowball...this said Squealer, was something called tactics. He repeated a number of times, 'Tactics, comrades, tactics!' skipping round and whisking his tail with a merry laugh." Squealer was very persuasive and he managed to change what the animals believed. He changed their opinion and he proved once again that he could "turm black into white". Another key incident where we can see that language can be mightier than violence is the incident where Squealer says bad things about Snowball. ...read more.

"No animal shall sleep in a bed with sheets" obviously the pigs had changed the commandment they had added that extra part at the end. And as George Orwell says, "And Squealer who happened to be passing at this moment, attended by two or three dogs, was able to put the whole matter in its proper perspective." As usual Squealer, using his persuasive language, made it clear that the commandment was like that from the beginning, and nothing had changed. He explained about the pigs sleeping on beds, and made himself clear that they sleep on the beds because of the hard brainwork the pigs had everyday. As we can see, in Animal Farm, language is much more important than anything else. Napoleon made all the animals think that everything was going well on the farm by using Squealer to persuade them. He used his language and his tricks and he could make the animals do what he wanted. And as we saw the pen made the animals confess, but no the sword, the sword was only used to kill those who confessed. ?? ?? ?? ?? Martinos Yiorkas 4 Black ...read more.

The question asks candidates to discuss how George Orwell uses language as the ultimate tool for totalitarian control over the animals in 'Animal Farm'. This candidate excels as they correctly identify three key features of the novel, both thematic and ...

The question asks candidates to discuss how George Orwell uses language as the ultimate tool for totalitarian control over the animals in 'Animal Farm'. This candidate excels as they correctly identify three key features of the novel, both thematic and literal, to answer the question. They address a variety of different characters and their roles in manipulating language in order to sustain their authoritarian reign (Squealer, Napoleon), as well as how the other characters react and adhere (Boxer, Snowball) to show how language controls them. The use of the epigraph "The pen is mightier than the sword" suggests this candidate is very well-read and knows how to incorporate external research into their essays; this kind of response is excellent as it shows examiners the candidate possesses an incentive to conduct independent work to help fortify their answer.

The Level of Analysis is extremely well-expressed. Their is a clear-cut addressing of three different features of 'Animal Farm' where the candidate evaluates how Orwell presents language as the dictator's ultimate tool. They regularly make links back to the source text and show an adept understanding of the novel as a whole, not just the sections they talk about at length. To show an understanding of the novel as a whole (this candidate shows this by talking about Boxer's influence on the other animals and the reasons behind Napoleon befriending the articulate Squealer, etc.) is a very good method of conveying knowledge. Candidates can provide the best answer that stick rigidly to the question and still do very well, but to show a knowledge that spans the entire novel is the sign of a top mark candidate.
Where this answer could be improved is how the candidate quotes from the source text. Instead of quoting a whole passage of four lines, as they do in their second paragraph, they could integrate what is said about Squealer into their own writing e.g.: "In the story, Napoleon gets advantage of this and he uses him for his own personal use. Napoleon wasnÃ¢â‚¬â„¢t Ã¢â‚¬Å“much of a talkerÃ¢â‚¬Â, so Squealer was what Napoleon needed." could become: "In the story, Napoleon gets advantage of Squealer's ability to "turn black into white" and uses him for his skills as "a brilliant talker" to get what he wanted.". This skill is extremely valuable for all candidates wishing to achieve top marks, because not only does it save an enormous amount of time in exams, it shows an ability to directly integrate embedded quotes into their own sentences, rather than putting a break in the sentence to squeeze in a quote. Using embedded quotes mean the answer flows more and is far easier to read, and is the sign of a confident and adept analytical writer.

The Quality of Written Communication is fine. There are a few errors that could easily be corrected with spell-check or a proof-read before submission, but none of them compromise the understanding of the answer. Where this candidate might be penalised is in their quoting, where huge blocks of text are copied into the answer and, in reading the quotes, the original sentence is lost somewhat, meaning examiners have to re-read the statement being made. If the candidate includes more embedded quotes and works on their ability to use these more frequently than detached quotes (quotes that do not flow seamlessly with the sentence), then the strength of their answer is greatly improved.